Now on Twitter as @DataRepublican. Not sure how much Tweeting I’ll be doing, as others have done well on my behalf - thanks particularly to @larryschweikart, @CottoGottfried, and athein1.

This is not a “live” map because NC does not update its data continuously like the Florida SoS.

But the map does compress the entire North Carolina public voter history and present it as a “Split Advantage” view (per the FL map).

Have a little patience when loading - there’ll be an initial load of a 4 MB file.

Also: why you shouldn’t panic!

See here for a belated deep dive into the voting history of those who are doing VBM.

See here for an update, and by request, an age breakdown.

If you’re a numbers geek, visit the Election Predictor which will allow you to build your own turnout model based on 2016.

Lockdowns have driven a surge in demand for mail-in voting. North Carolina’s mail-in requests currently stand at over fourteen times the demand at the same time in 2016.

Should Republicans toss in the towel then?

No! Actually, Joe Biden needs to throw in the towel.

I will explain why.

The MSM has convinced Democrats voting in person is dangerous

It is well known that the MSM has made a massive push to get Americans to vote by mail. Thus far, this push has been effective on Democrats, but not so much Republican. Nate Silver says:

The percent of Democrats intending to vote by mail rises to 57% in battleground states, which have remained locked down for the most part. Source

Polls show that Democrats strongly believe that voting is a health risk.

Given these priors, it seems exceedingly unlikely that Democrats are inclined to go out and vote during Election Day. Joe Biden must get the majority of Democrats to vote by mail!

So what voting methods will voters take? Here’s what a poll says:

The surveys are consistent:

What does that mean for North Carolina ballots? Well, we can take the numbers from 2016 and extrapolate them to figure out target turnouts for Joe Biden based on stated voter preferences.

First, we find out how many people in each registered party voted in 2016 Source:

In 2016, 1,872,593 Democrats voted in the election, compared to 1,571,730 Republicans and 1,305,330 Independents. Assuming the respective parties voted for their respective candidate at 100%, independents broke strongly for the Republicans.

We can use these numbers to establish target baselines for each party to reach 2016 turnout levels using stated voting by mail preferences.

How are the parties tracking?

Using the published reports, we can detect the linear trends and make a projection as to how the parties are currently tracking. 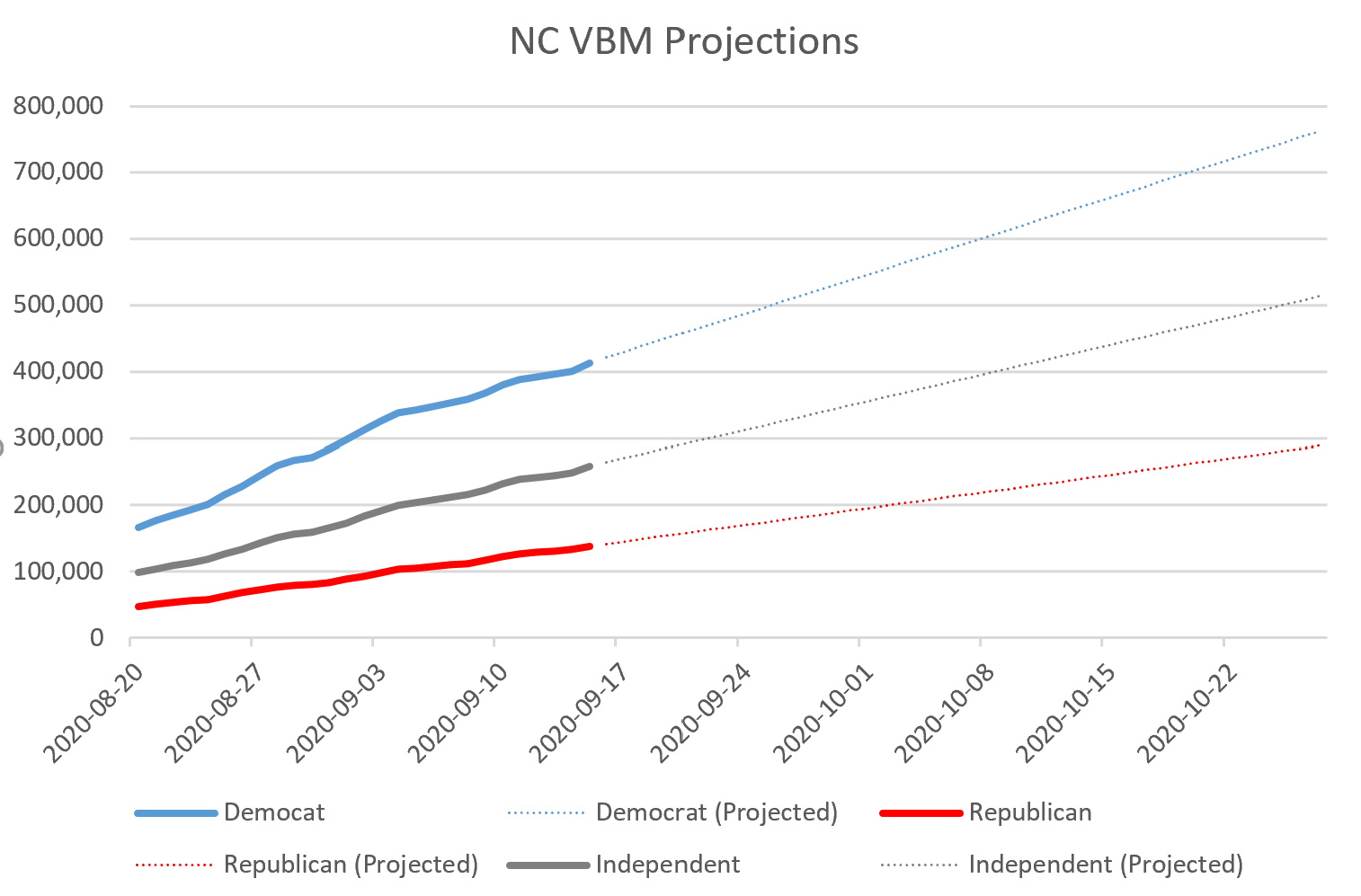 We capture the projections to October 27th, the last day a ballot can be requested, and find the following.

Joe Biden is well under where he needs to achieve a VBM majority.

The above models were using optimistic assumptions - that only 50% of Democrats intend to vote by mail (polls indicate closer to 55%), whereas 18% of Republicans intend to VBM (recent polling shows this number can be as low as 11%).

When these other factors are considered, Joe Biden is done… maybe even 1984 done… but if and only if Republicans can deliver on their Election Day and early voting GOTV efforts.

The media will be trumpeting the mail-in voting numbers as if they are portending a doomsday scenario for Trump. You can smile and know they are in for a nasty surprise on Election Night.

Recommendations for the Trump team