Who are the independents?

Of note is that independents have exceptionally competitive VBM sign-ups with Democrats. At their current rate, as a percentage of 2016, they will overtake Democrats as the party most represented in VBM statistics.

Independents famously carried Trump to victory in 2016, but are the Independents signing up to VBM the same independents as in 2016? To answer the question, I look at which counties independents are requesting the most ballots in as a ratio of 2016.

The greener, the higher the ratio of independents relative to 2016

If you are familiar with NC, the dark green states are a mix of red and blue counties. The greenest southern and western counties are red, while the ones in the middle are dark red. But the white counties to the east are blue. What gives?

In short, the independent voters are disproportionately new voters to North Carolina. The correlation to a map of population changes is pretty strong: 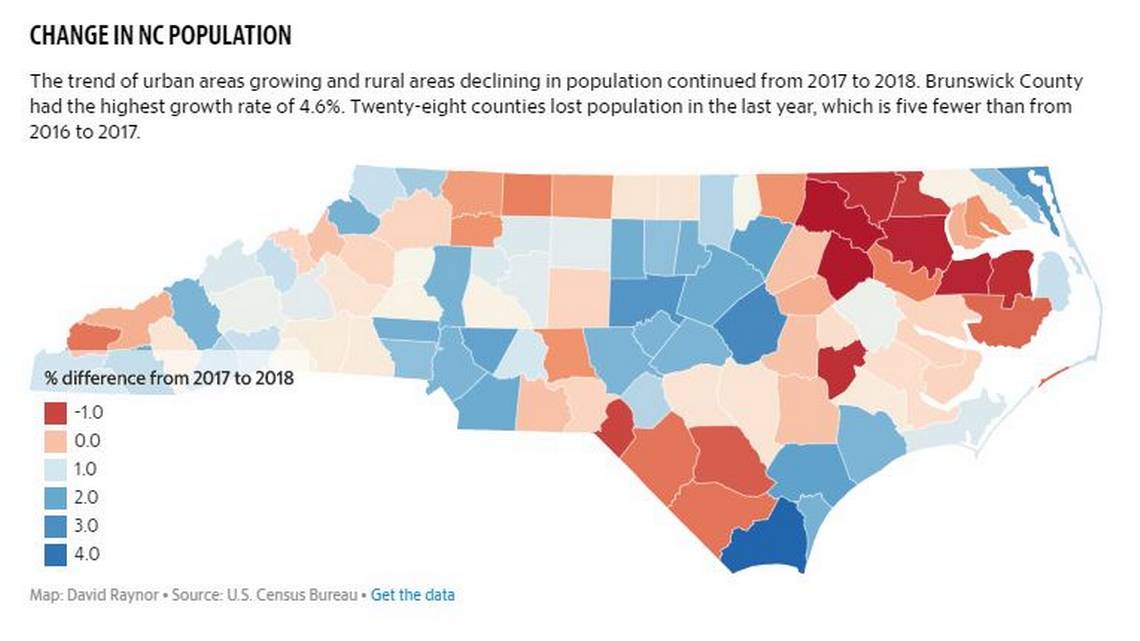 Per this website, new voters tend to be unaffiliated.

New voter registrations suggest an overall swing away from major parties and towards unaffiliated, with the greatest impact on the Democrat share of registrations. Among new registrants since the 2016 general election:

It seems that these voters are “swingy” and should be a focus for a campaign to capture.

With that, we dive into the crosstabs. Keep in mind that the VBM independents are expected to exhibit a “bluer” bias, per polls showing 47% of Biden supporters wanting to vote by mail versus ~20% of Trump supporters.

Independents who are signing up to VBM in 2020 are somewhat older than their 2016 cohort, as would be expected. The gender split is very close. 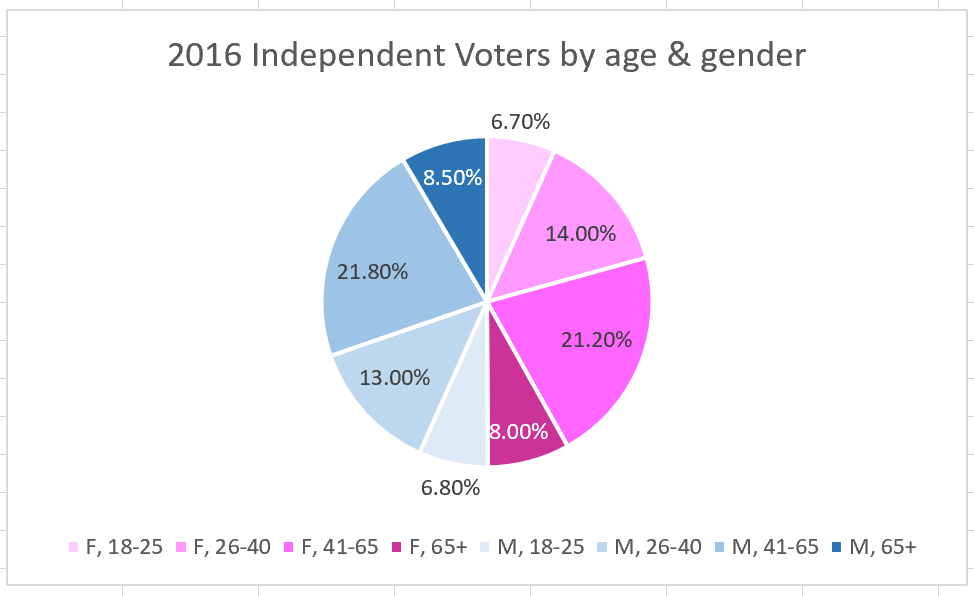 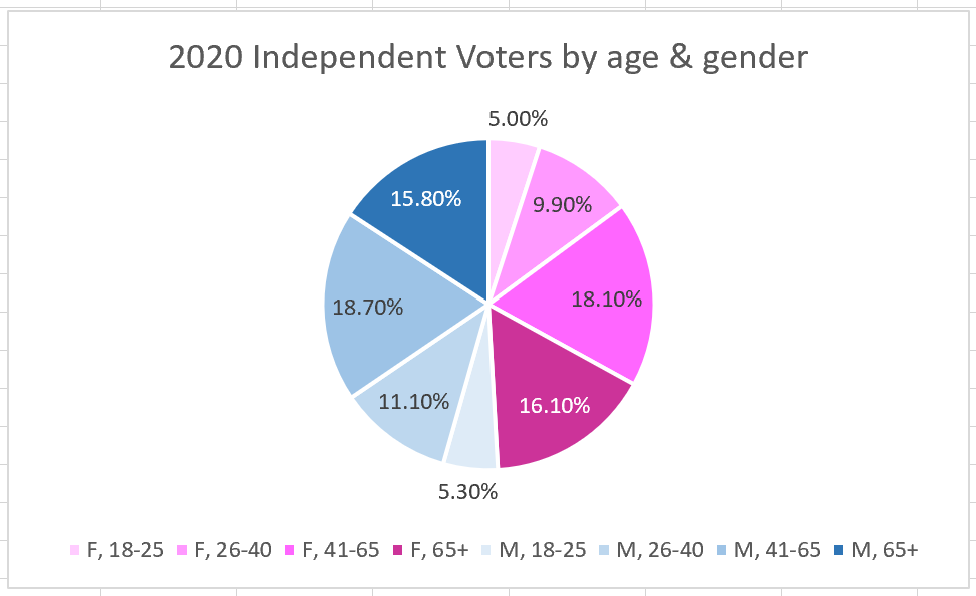 Compared to 2016, 2020’s independents are more blue. However, keep in mind that Democrats strongly declare a preference to vote by mail, so the below numbers are distorted by that. I expect at least twice as many Democrats to vote by mail as Republicans, so these numbers might be more cheery red when adjusted for that.

Anecdotally, most parents I know are angry over the school issue, so I decided to investigate the question of whether that affects independent turnout.

NC doesn’t keep track of how many children independents have, but we can correlate to the counties the independents live in. I split independents into one of four buckets:

Surprisingly, the results seem significant. I’m not sure how to interpret them. 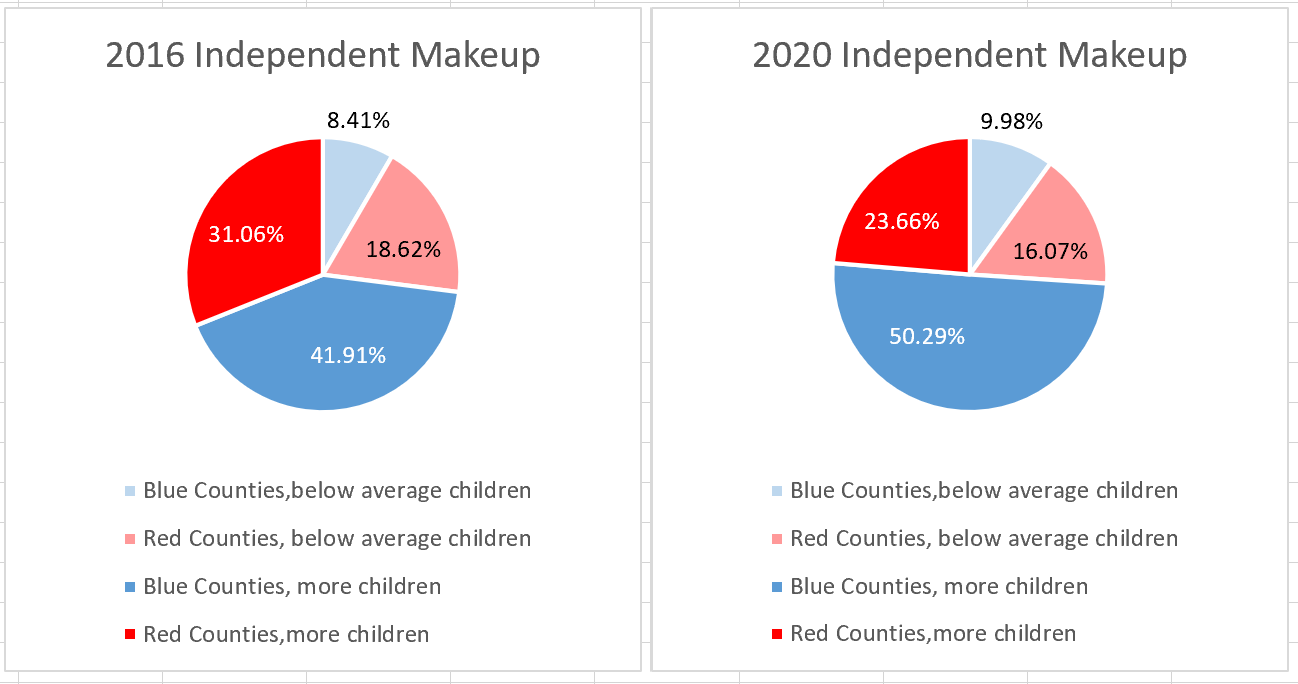 There is no strong obvious “a-ha” motive for why Independents are overrepresented in VBM - indeed, it may not be a question of whether they are motivated as opposed to whether they are growing faster than R and D registration. They have outpaced both Democrats and Republicans in voter enrollment since 2016. Either way, the statistics do show that they are growing in influence, and thus the Trump campaign would be wise to reach out to them.