First, an update for 5 October. I don’t make many updates to this blog because, among other reasons, the premises to the blog still hold true.

I have a model which assumes a linear increase of VBM requests based on a 7-day rolling average. 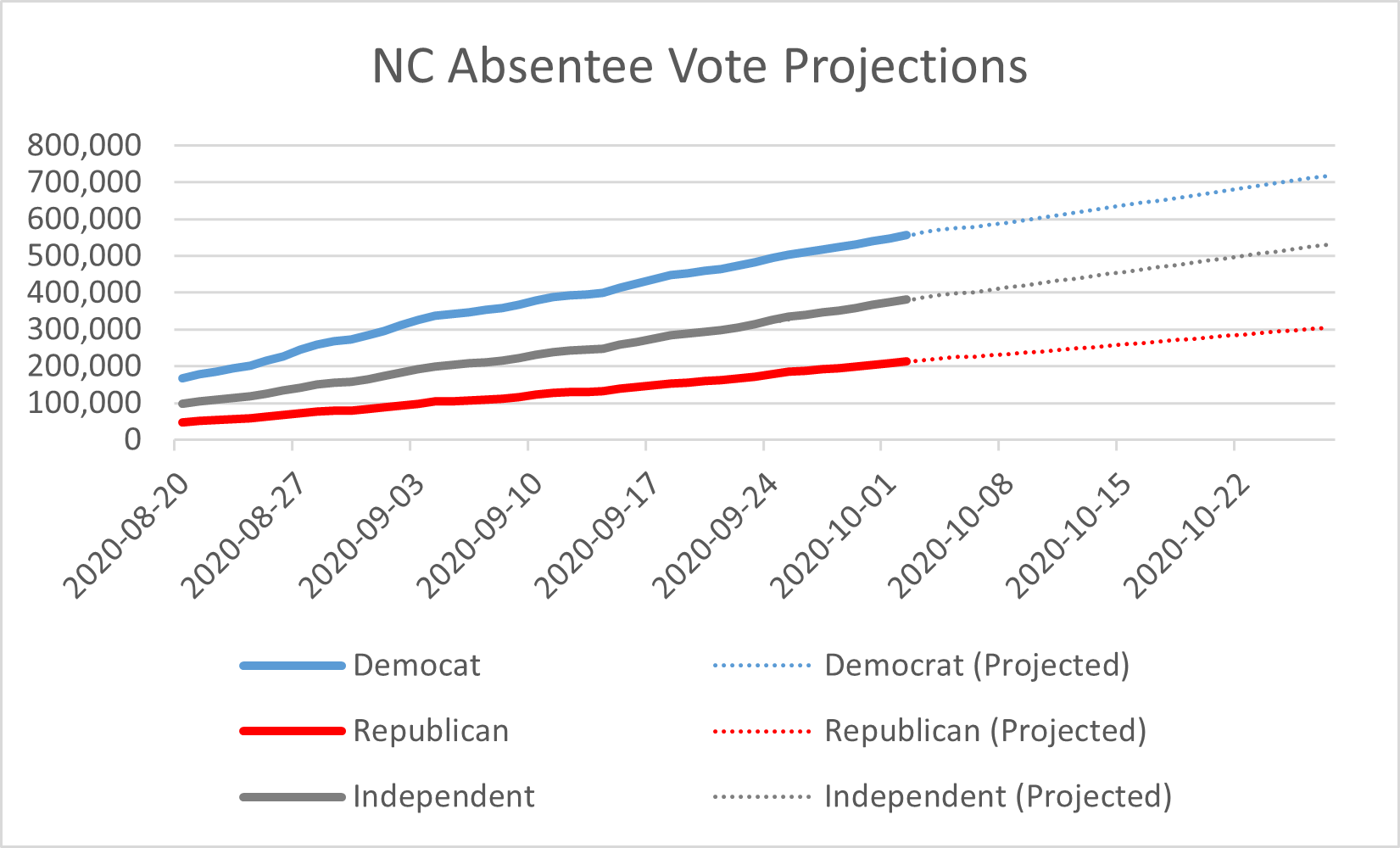 In the above image, the actual numbers are the solid lines, the projections are dashed lines. The trend has changed little since I began this blog; the numbers have been around VBM requests matching 40% of 2016 turnout for Democrats, 20% for Republicans, and 42% for Independents.

(The higher turnout for independents is likely a simple function of new NC residents being more likely to register independent; see this post.)

Little has altered this model. Requests sped up a bit for Republicans and Democrats in the wake of RBG’s death but slowed down quickly. Here are where the numbers stand:

Yes, that’s right, the numbers have worsened for Biden since I started tracking this model!

Now, that being said… if I think like a Democrat, I would be pivoting my focus to voter suppression, and attempting to discourage Election Day turnout.

That, sadly, is easy to do in the COVID-19 era between staffing issues, facility capacity requirements, and social distancing.

Imagine this: Fewer polling stations are set up, to limit exposure to government workers. Only five people are allowed in a building at a time. People are mandated to be 6 feet apart in lines.

The result? Long lines despite a low turnout. Lines snaking for blocks and blocks. My recommendation, therefore, is the GOP do everything to mitigate long lines - whether by messaging, offering placeholders, early voting drives, etc.

Anyway… onto the age and gender deep dive. 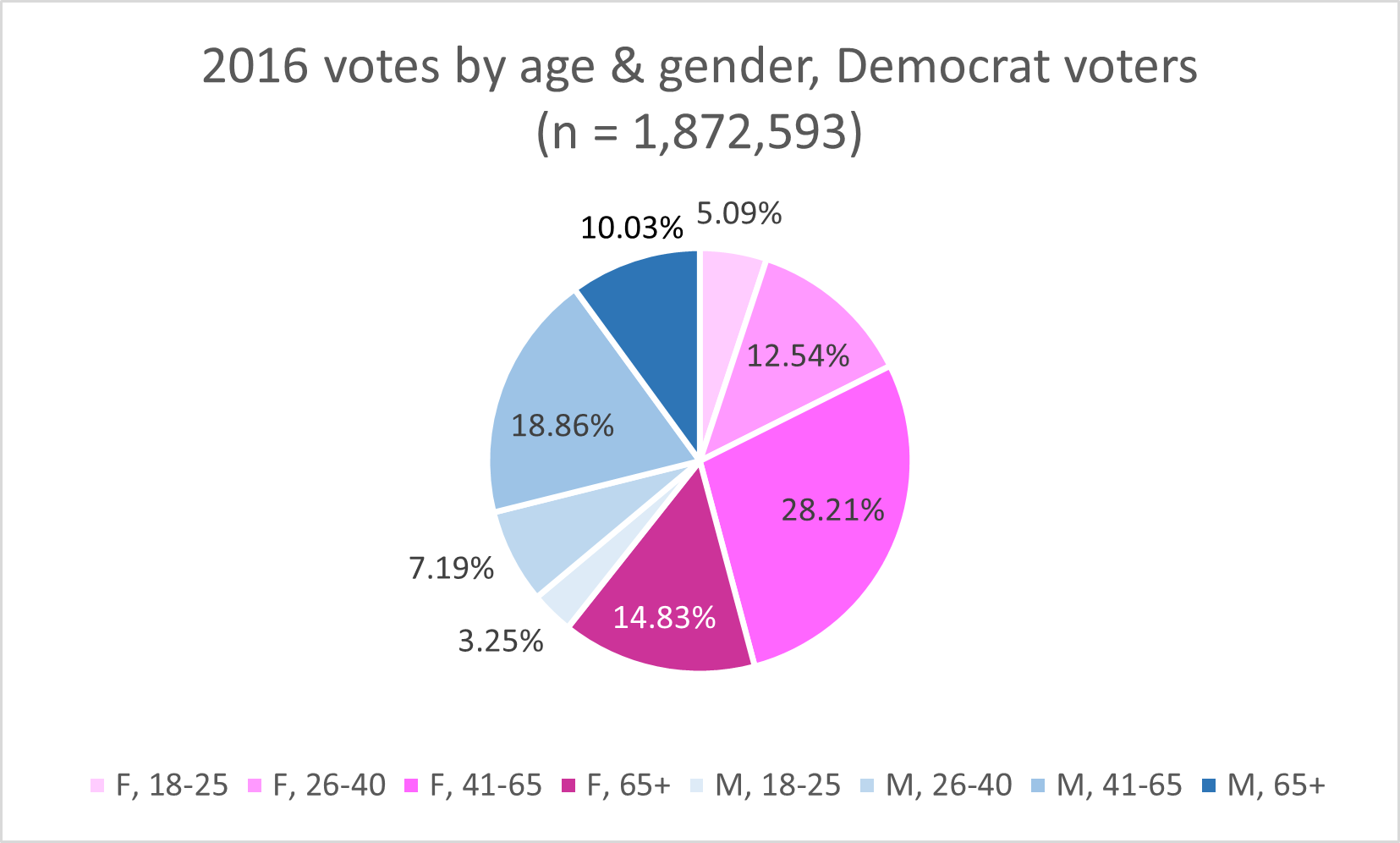 We start off by analyzing 2016 as a comparison point. In NC, there is a big asymmetry for age and gender among Democrats - Democrats tend to be overwhelmingly women, and tend to be older. 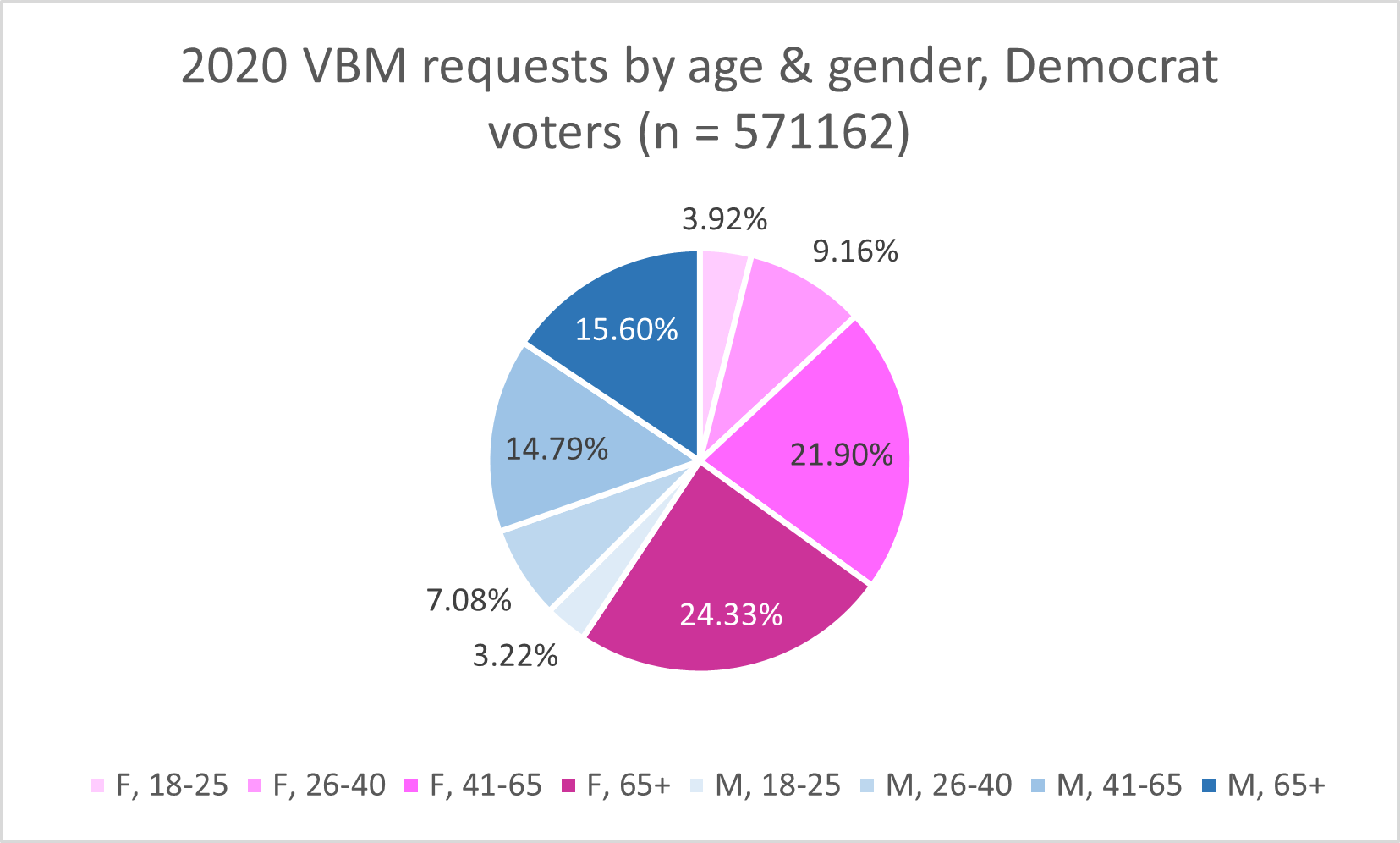 Democratic VBM requests are heavily female, and as expected, significantly older than the 2016 crowd in general.

One important thing to keep in mind is Simpson’s Paradox - as explained in the original blog, there exists a large number of older NC voters who will identify as Republican but are registered Democrat. It is difficult to suss out if these voters are “true Democrats” or “Republicans who never changed their party affiliation.” 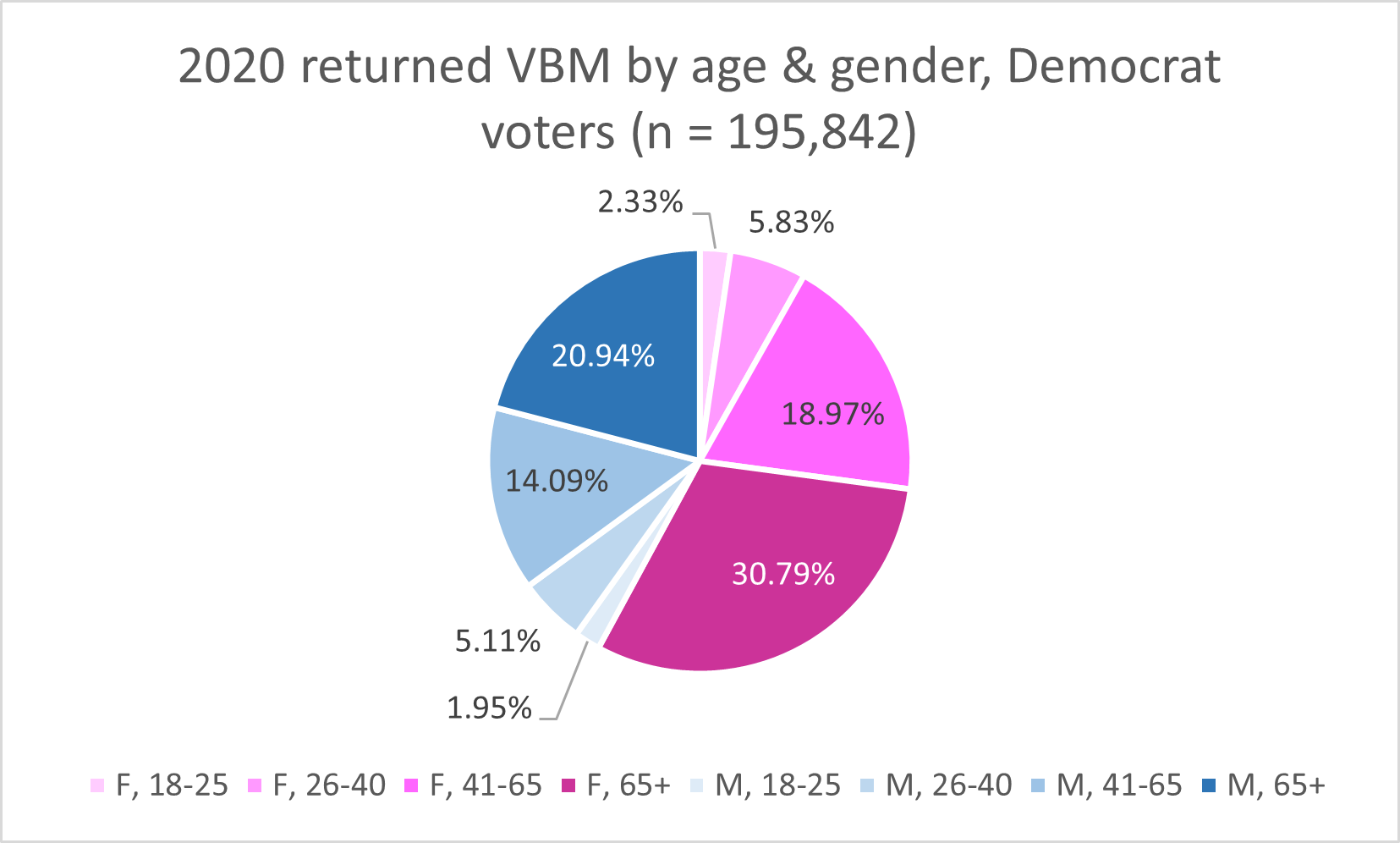 What about VBM requests? Well, a good chunk of them (34.3%) have already been returned. But once again we see an even deeper age and gender asymmetry - the returned ballot makeup is overwhelmingly older, with over 50% of all returned ballots being voters 65+ and <5% from those 25 and under. 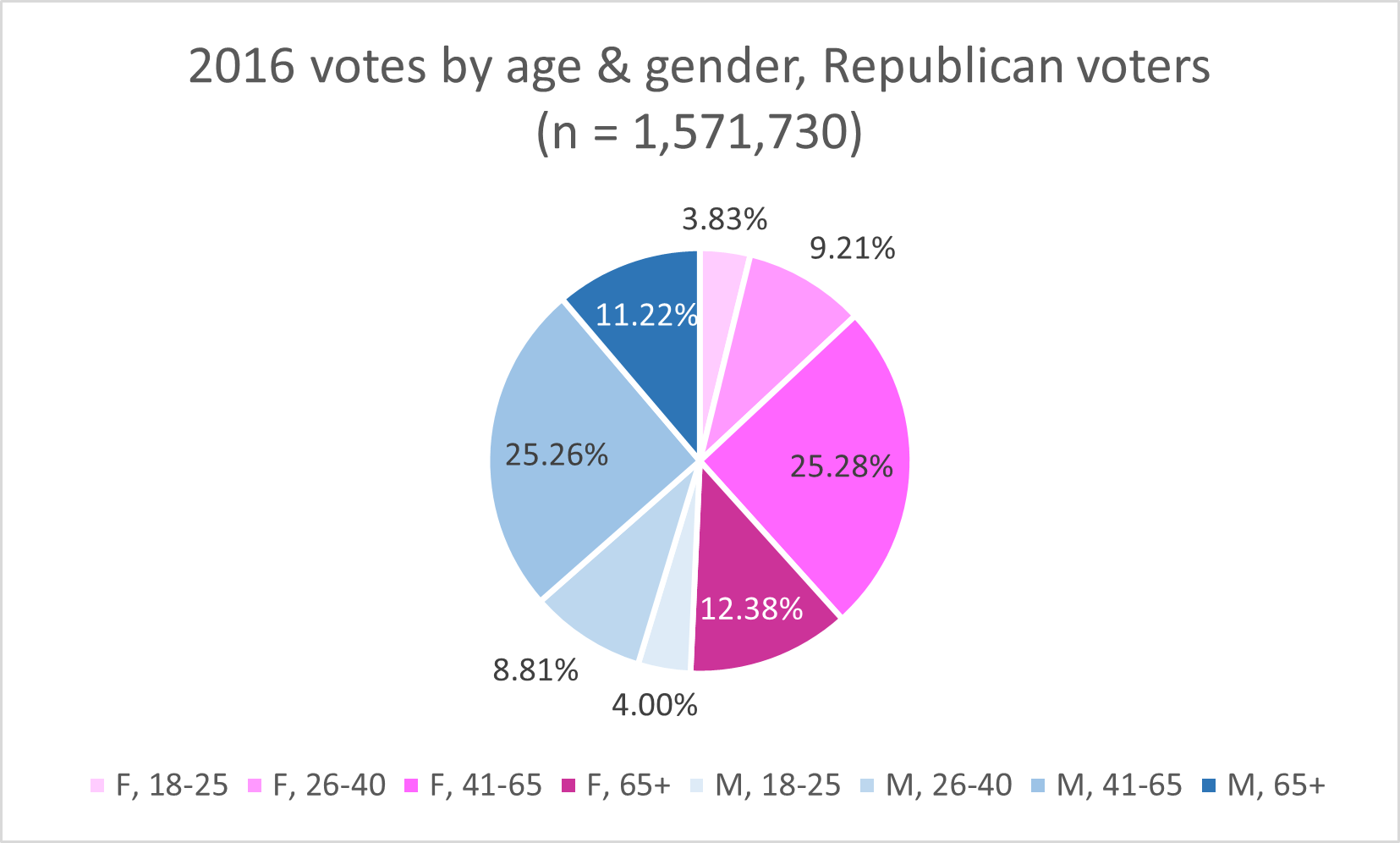 What about Republicans? Surprisingly, registered Republicans are much more balanced in gender compared to Democrats. They are a bit older than Democrats but not overwhelmingly so. 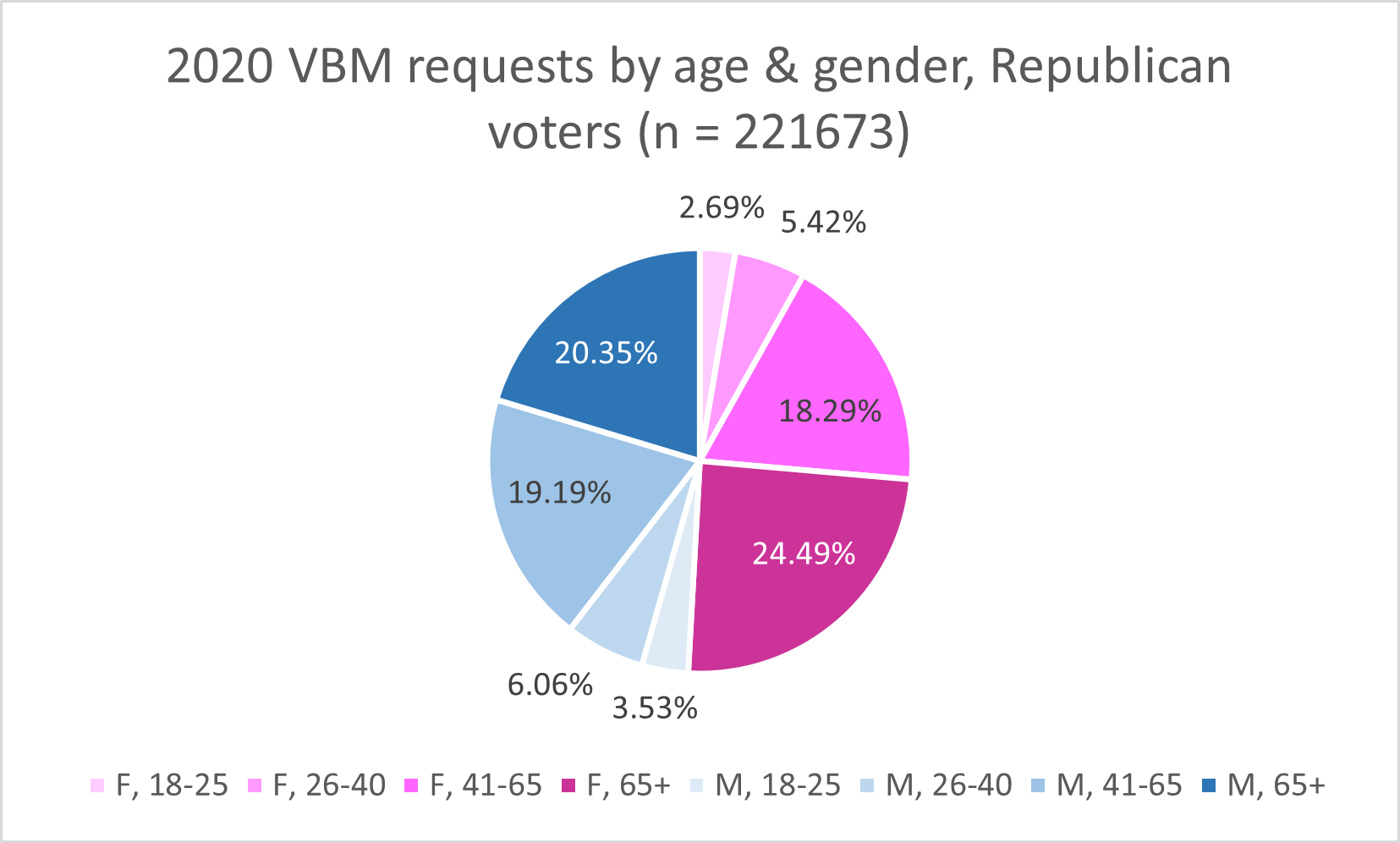 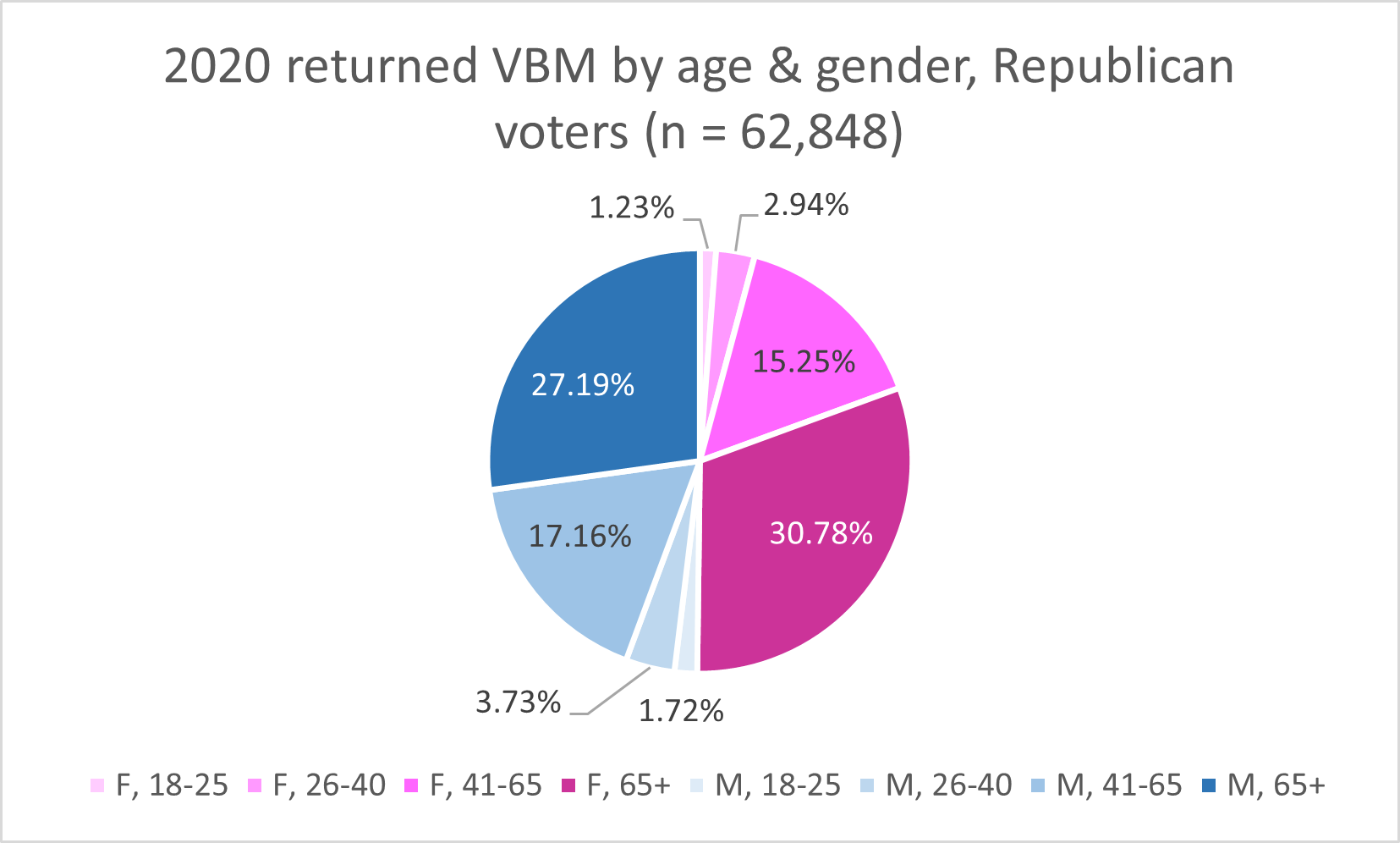 In terms of returned ballots - hoo boy. It’s overwhelmingly older people returning them. The enthusiasm for returning them is somewhat lower than Democrats, standing at 28.4% of all outstanding ballots so far. 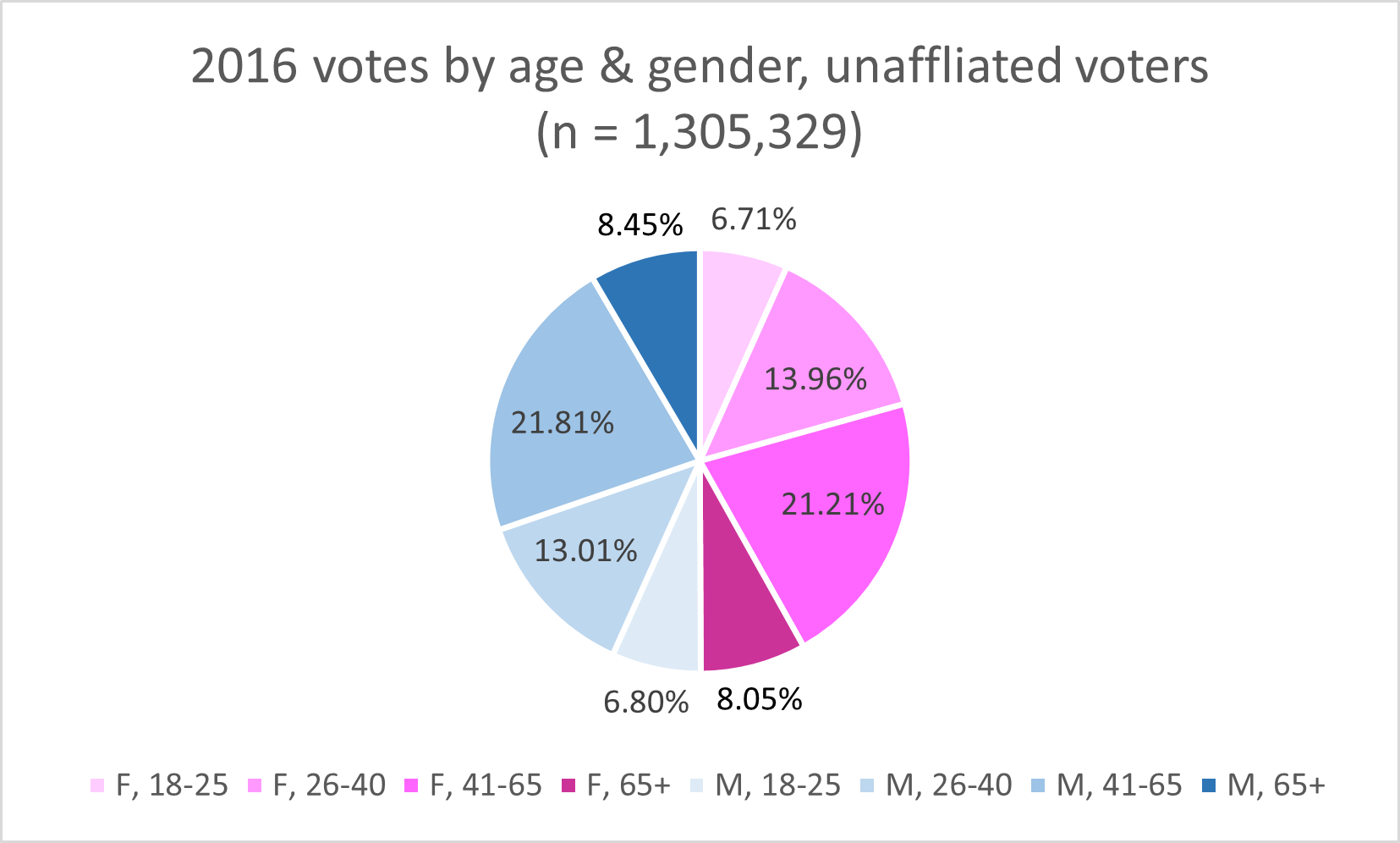 Independent voters have the most balanced “pie” of all three parties. They tend younger and slightly male. 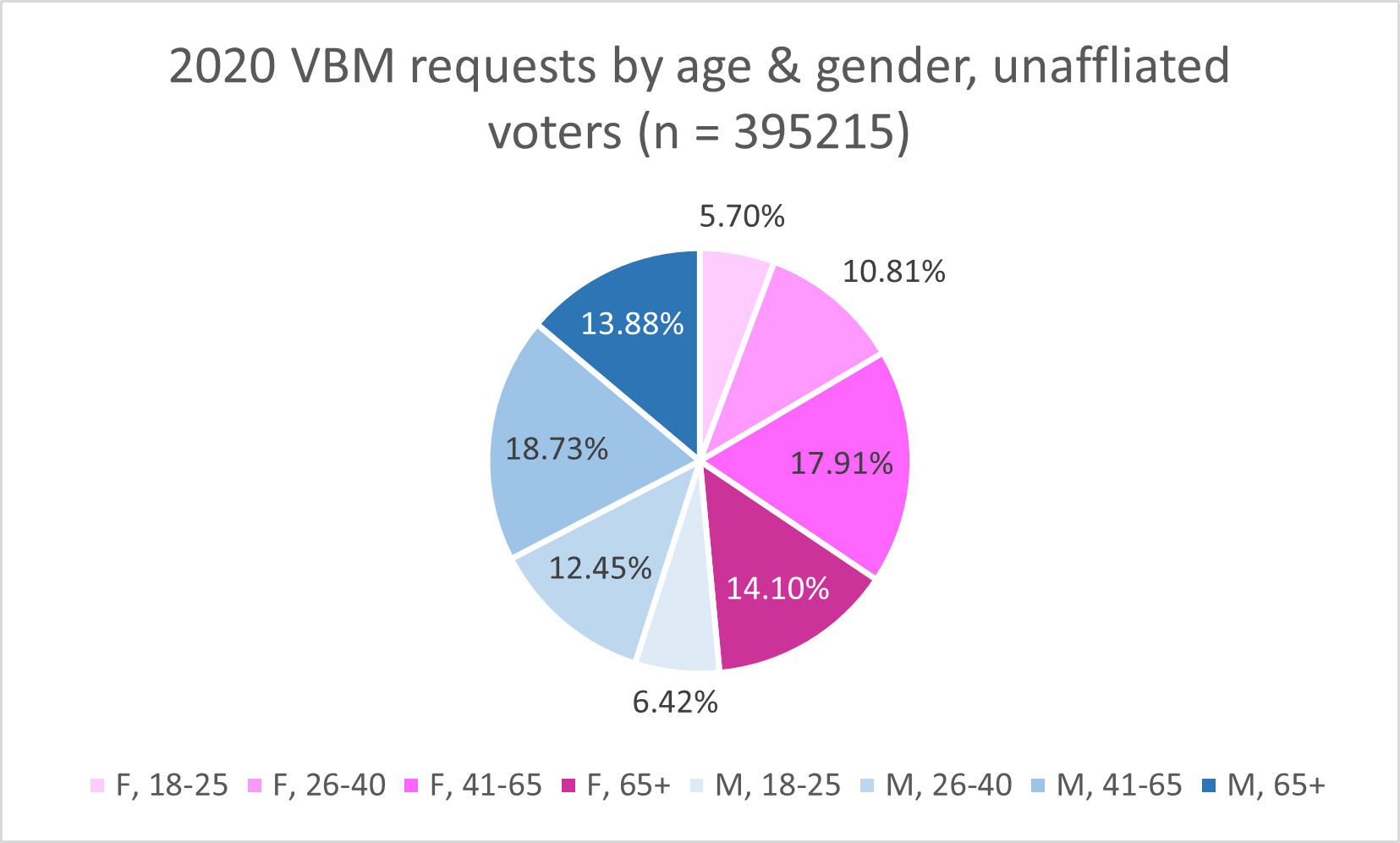 Again, we see with independents that the VBM requests tend to make up an older portion, but not overwhelmingly so. 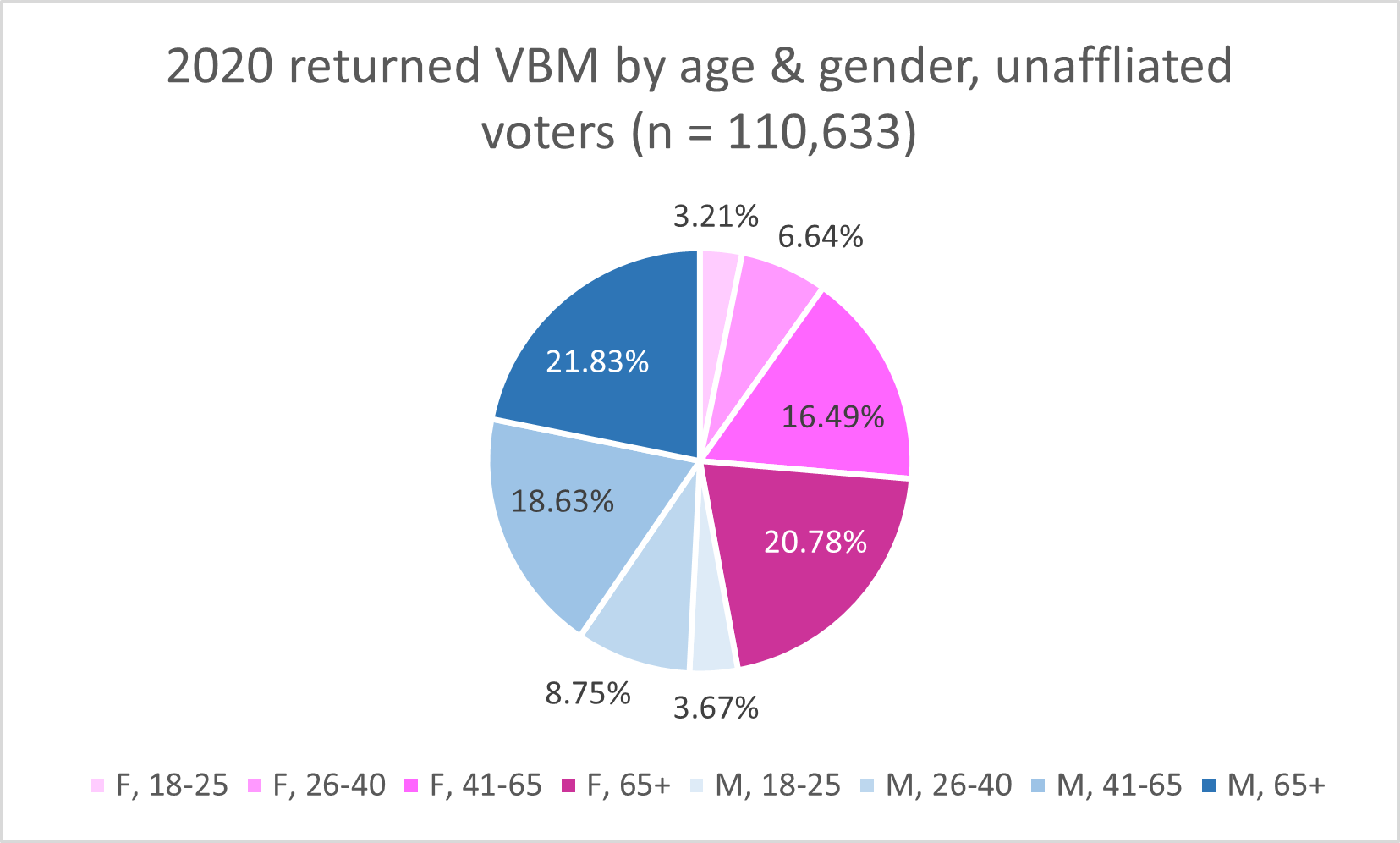 At 28% return rate thus far, independents are slightly less enthused than Republicans to return the VBM ballots. They have a similar motivation to vote by mail as Democrats per polling, but I lately see large numbers of undecided independents in polling crosstabs. They remain a good group for voter outreach.

Tune in tomorrow where I do an analysis of VBM returns together with voter history.