In the previous blog post at joeisdone, I explain why VBM analysis in 2020 is more accurately done using total voter turnout of 2016 as a comparison point.

Today, we will take a deeper dive at the demographics of who’s voting. North Carolina publishes excellent detailed demographic crosstabs on who’s requested a ballot with columns such as race, ethnicity, age, gender, party affiliation, and county. This allows us to deduce with whom the enthusiasm gap is.

All numbers here must be read with the filter that Democrats ideally need about 3x the turnout of Republicans in VBM terms. In that sense, Democrats are underperforming in every demographic except maybe the under-65’s.

Most notable is that there are strong signs that the overperformance with Democrats is partially an artifact of Simpson’s Paradox. In short, the Democrats have a registration edge with the 65+ compared with the under-65, and yet have been found to be staunch Republican voters in exit polls.

Also notable is that the enthusiasm gap with Black voters is very real.

The biggest area of caution is around independent voters. In 2016, the independent voters broke for Trump. However, since 2016, North Carolina has gone through population growth, and the newly registered voters tend to be unaffiliated. Hence, a strong recommendation to the Trump team is to focus on reaching out to transplants. 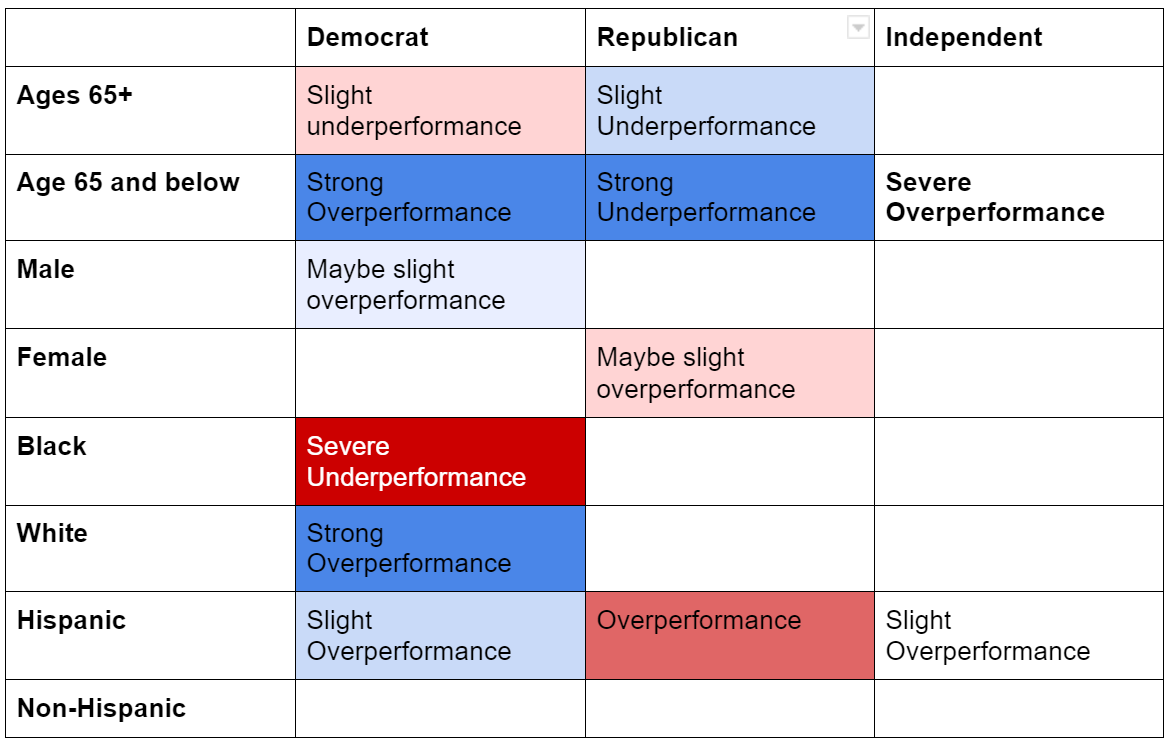 Who are the independents?

Updated with its own section; see Who are the independents

All baselines are taken as a percentage of their respective turnout in 2016.

First, we consider current VBM ballot requests as a percentage of 2016 turnout. Across all groups, that stands at 18.65%. In reality, only about 80% of ballots will get returned if historical Florida data is to be believed. 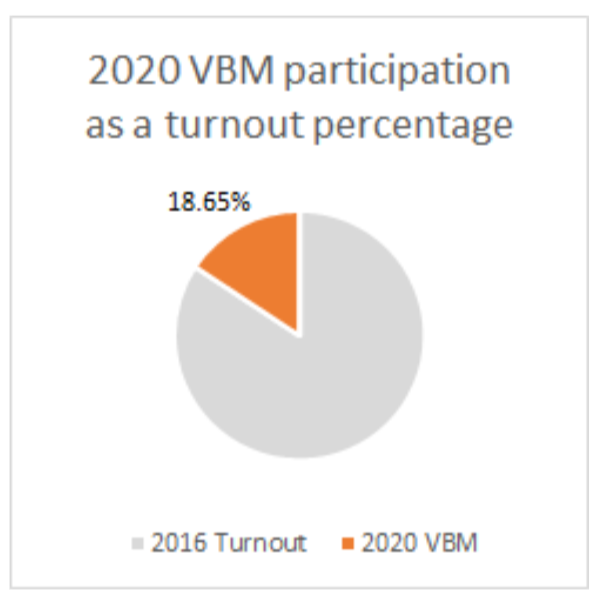 Second, we consider party makeup within VBM ballots - how the VBM ballots are split among Republicans, Democrats, and Independents. The Democrats have a commanding edge here, as expected. 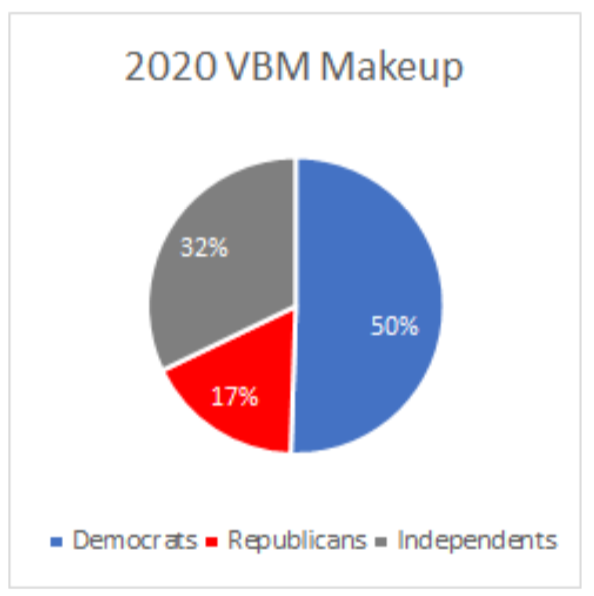 Breaking each party down by turnout as a percentage of 2016 clarifies exactly which party is outperforming and what party is underperforming as well.

With these in mind, we dive into the crosstabs.

We start out with the worst news for Trump. People aged 65 and over are by far the biggest outperformers for VBM, presumably due to COVID-19 disproportionately affecting that demographic.

Across the board, a full 34% of the elderly are participating in VBM as a percentage of 2016 turnout. These elderly are majority Democrat, which is unusual in a demographic that is traditionally Republican. This seemingly portends to a genuine weakness for Trump. 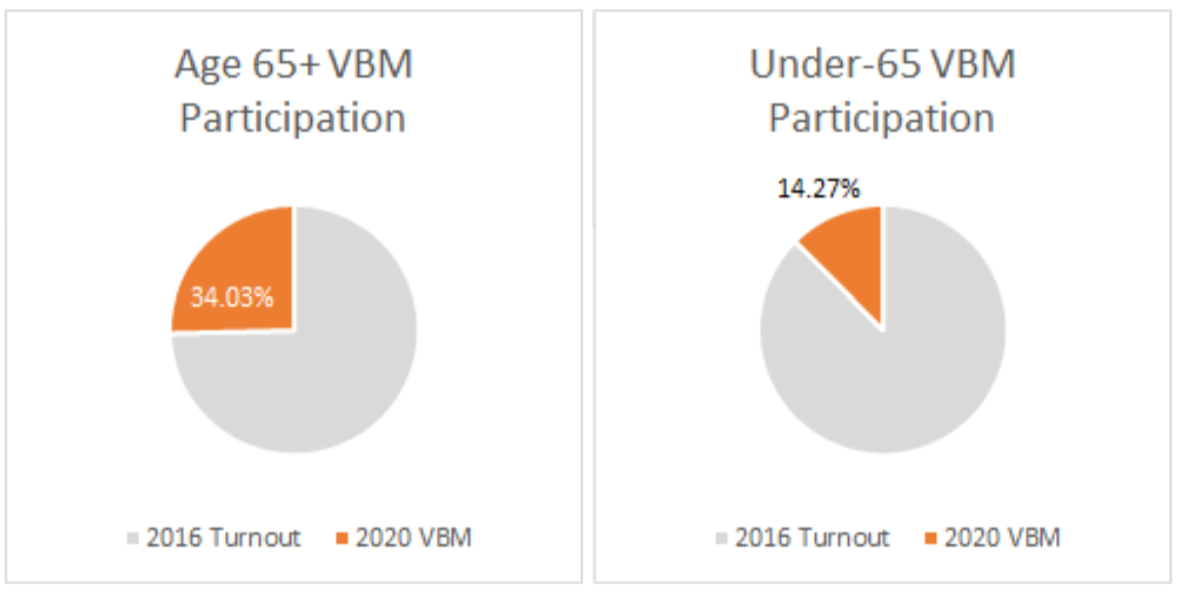 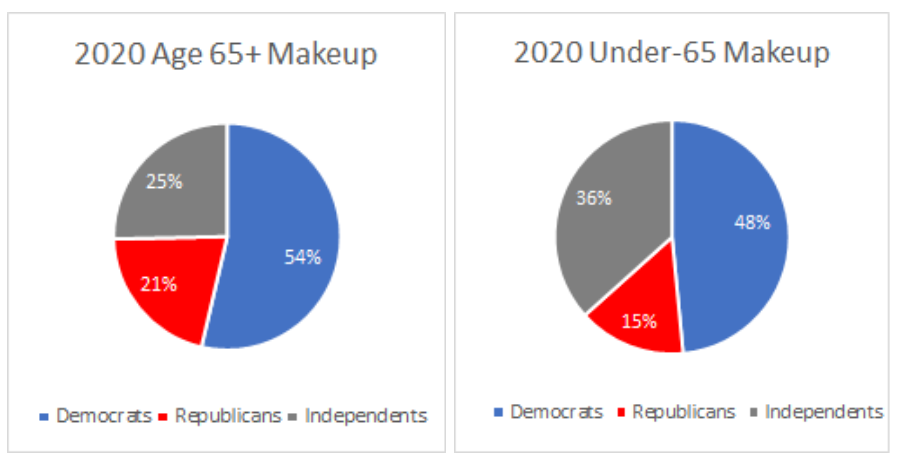 On the other hand, we are seeing an underperformance among Republicans in the under-65 age group. However, Democrats also appear to be underperforming in this group as well. 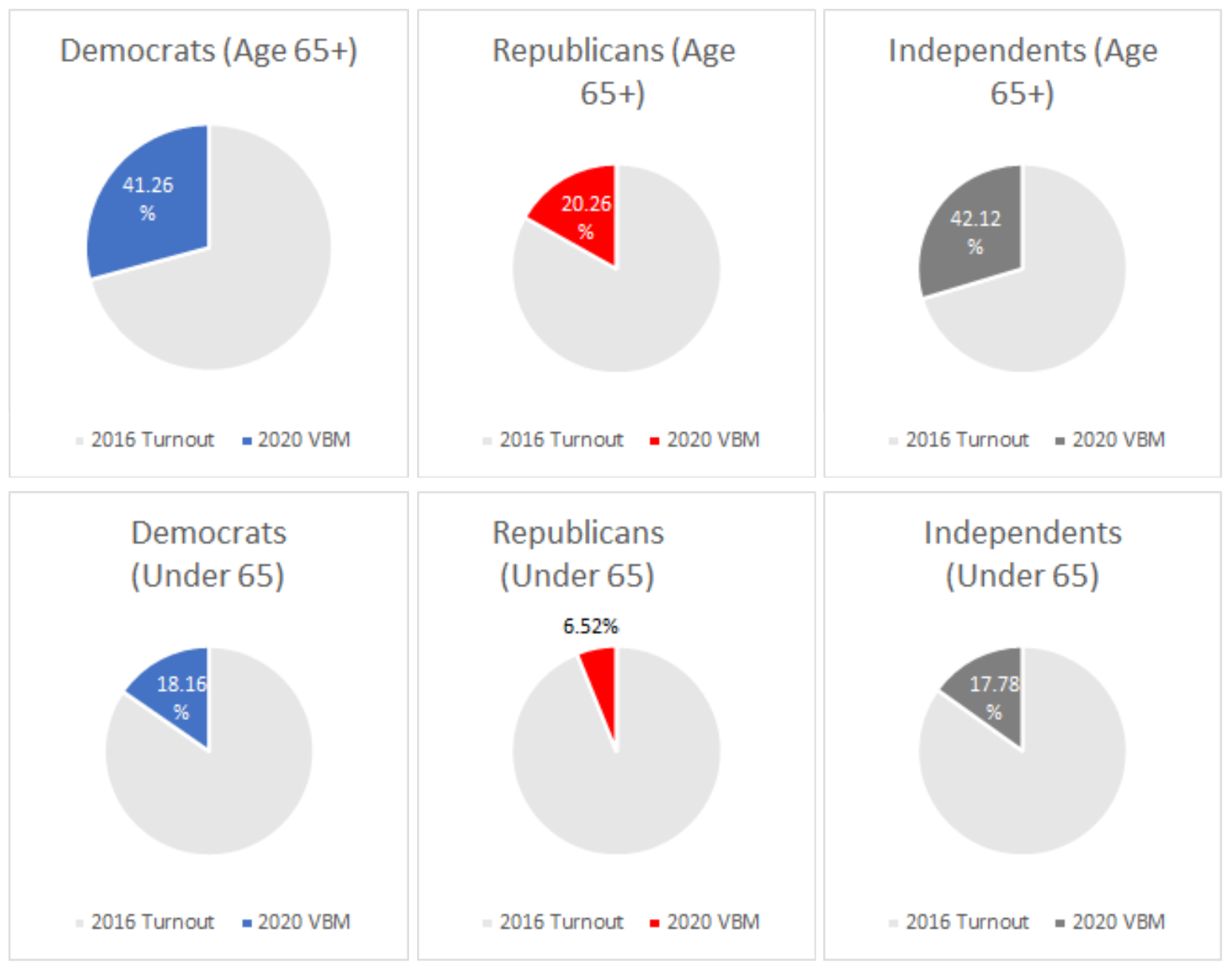 This is an effect of Simpson’s Paradox, because the majority of “crossover” votes have been speculated to be within older Democrats that never changed their party registration. Compared against the percentages of elderly voters in 2016, independents stand out as the far and away winner, while Republicans are strongly outperforming among under-65’s.

I leave another crosstabs for white voters by age, party, and year. 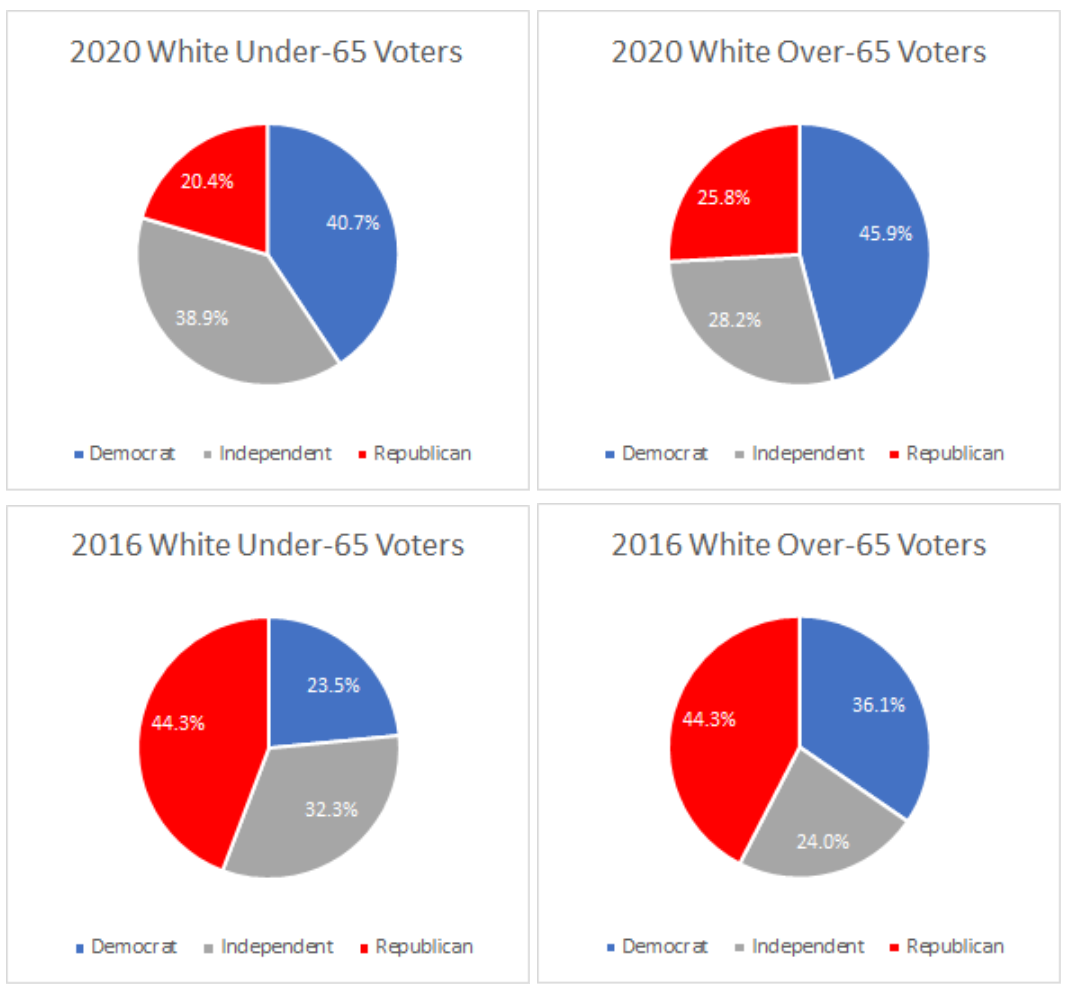 In perhaps the most troubling sign for Democrats, Black voters are under-performing white voters when it comes to VBM registration. Given that Black voters are so heavily Democrat, and given that VBM sign-ups are disproportionately Democratic, this portends to a severe communication gap. Black voters should be closer to 30% of their 2016 turnout at this point in time. 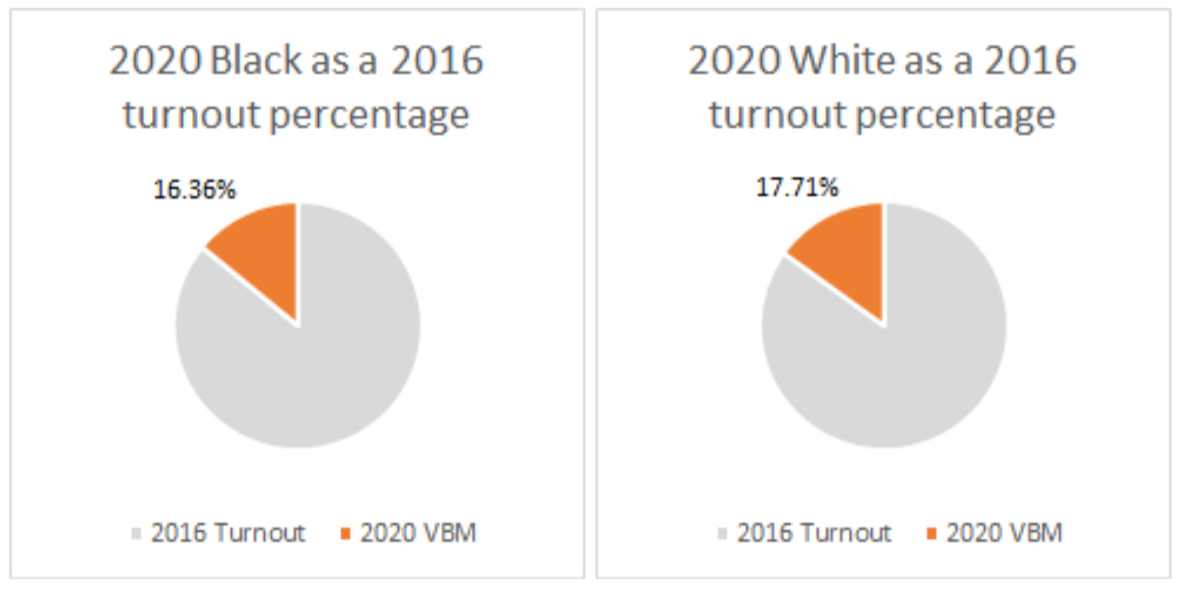 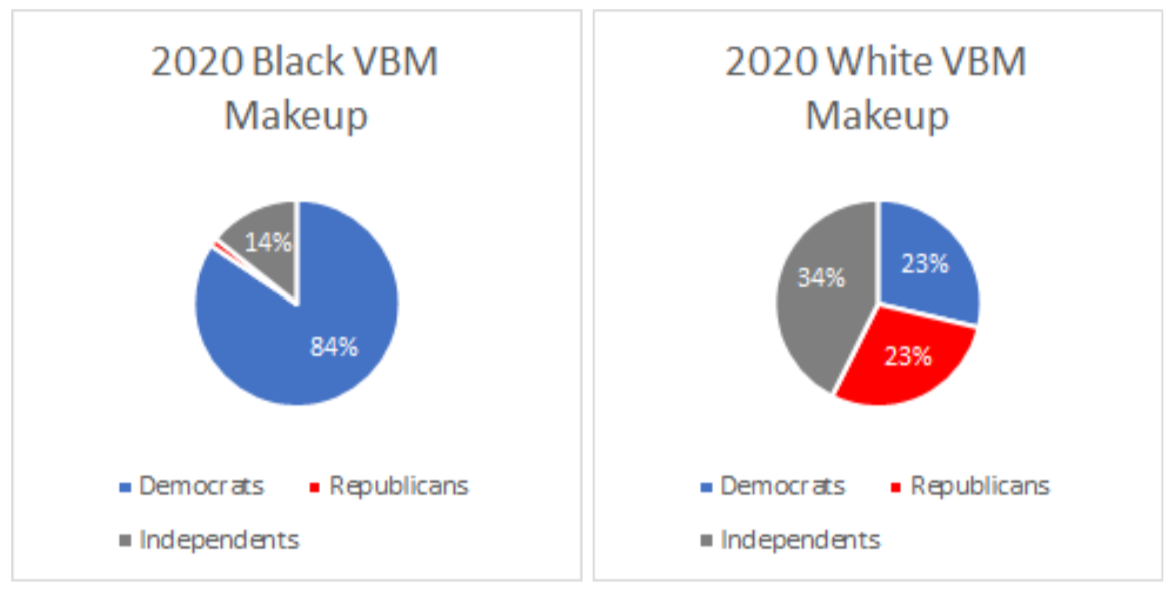 As the graphs below show, white Democrats are performing exceptionally well in VBM turnout compared to their Black counterparts. 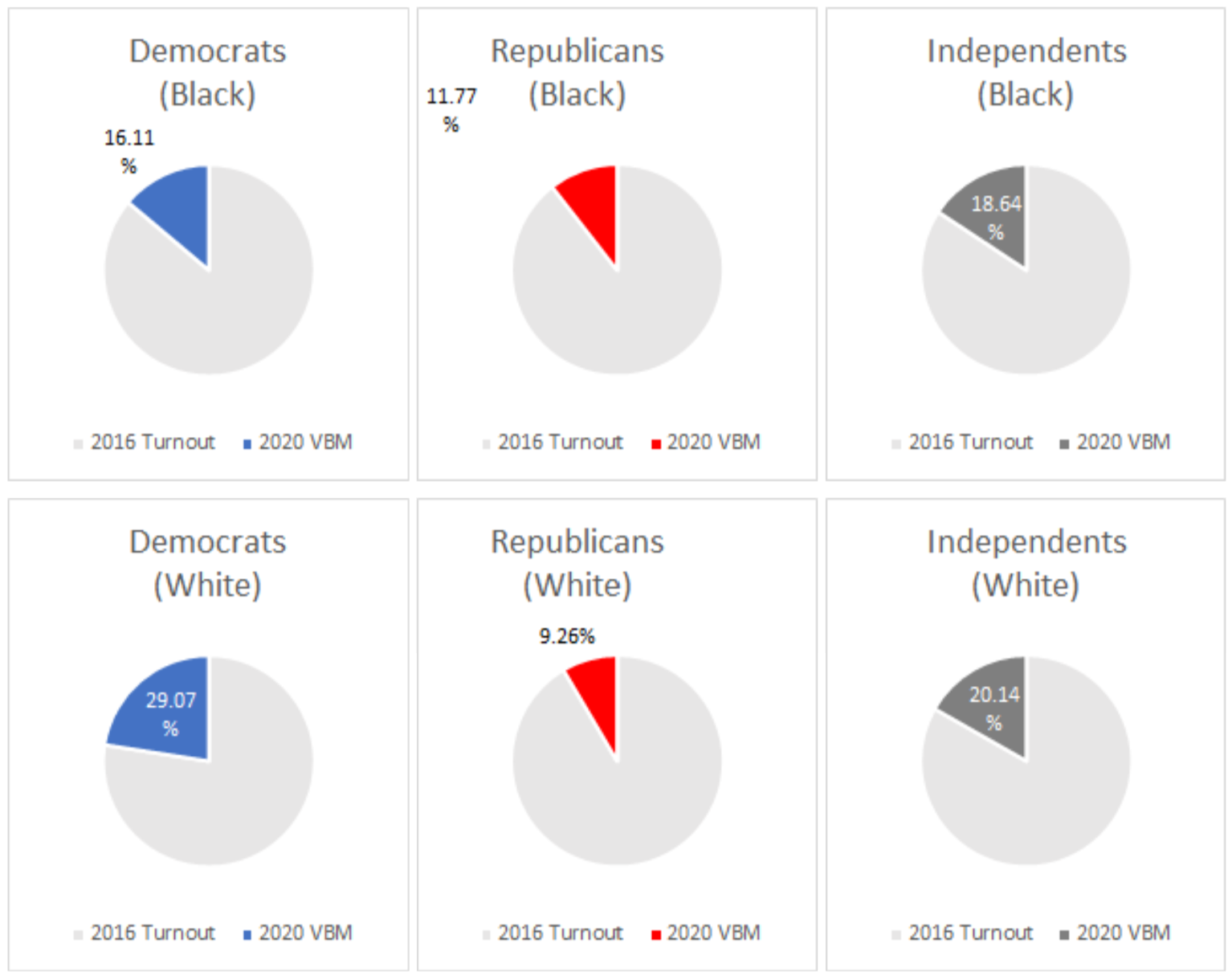 What should be particularly concerning for Biden is that Black independents are competitive with white independents, and Black republicans are outperforming white Republicans. So the split is not related to race per se - but rather Democrats are not able to make inroads with getting Black people to sign up for VBM, for whatever reason. 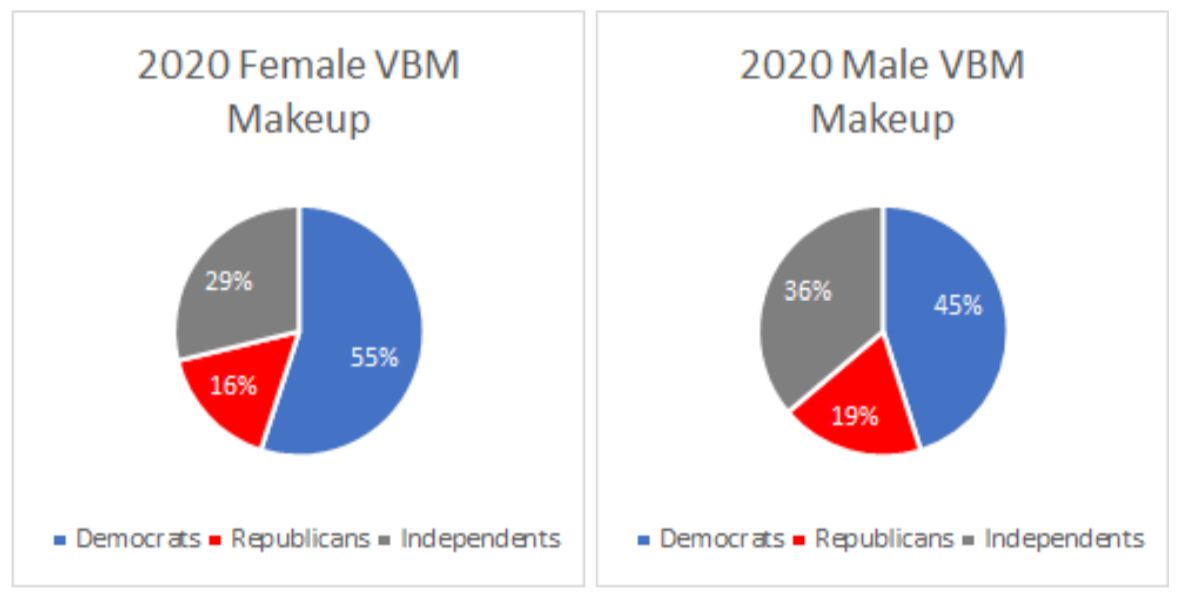 One surprising statistic is that Democratic and independent men are outperforming their respective female counterparts, and Republicans the opposite. This may point to a gender gap that will be narrower than it was in 2016. 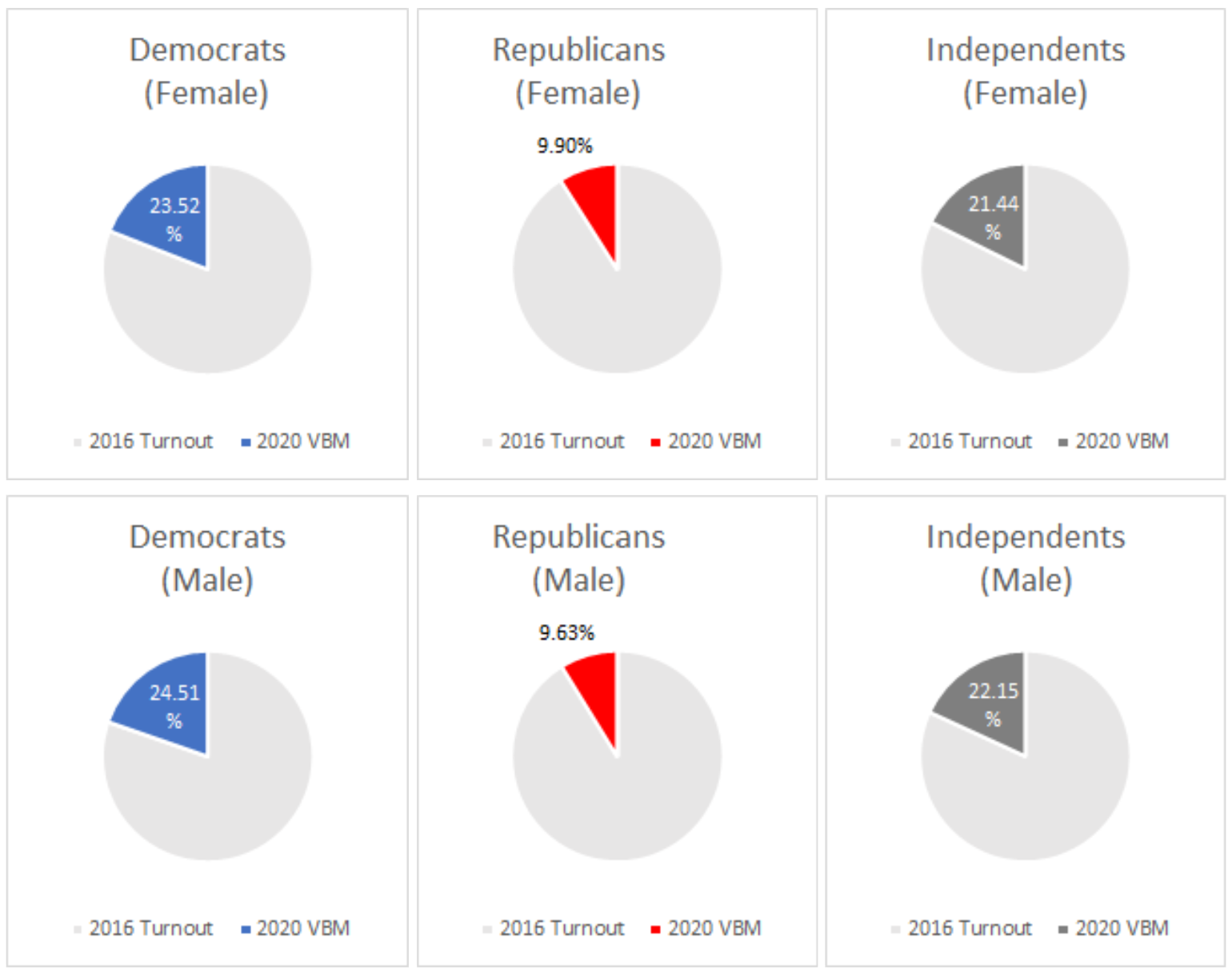 Hispanics seem to favor VBM across the board. 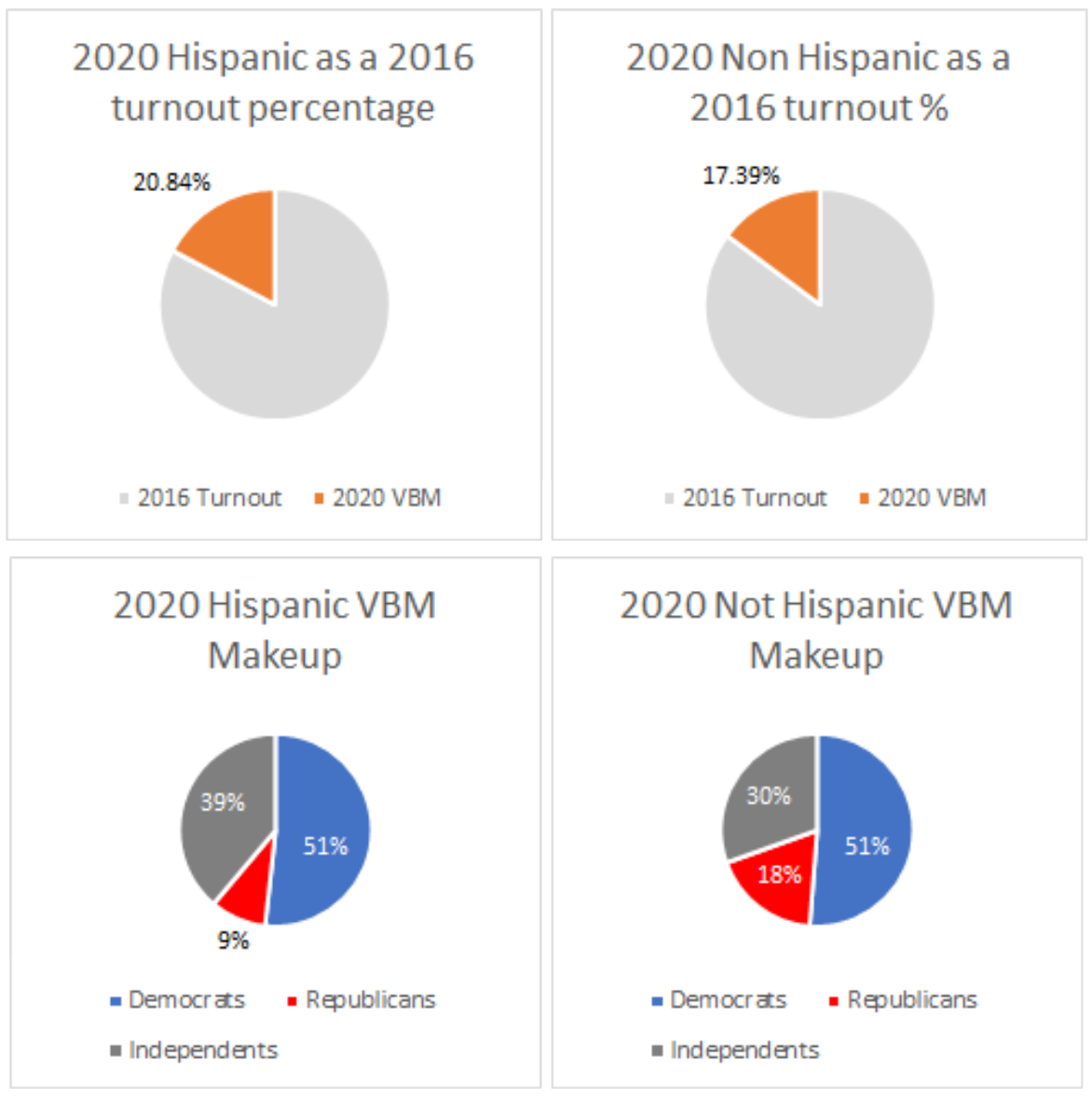 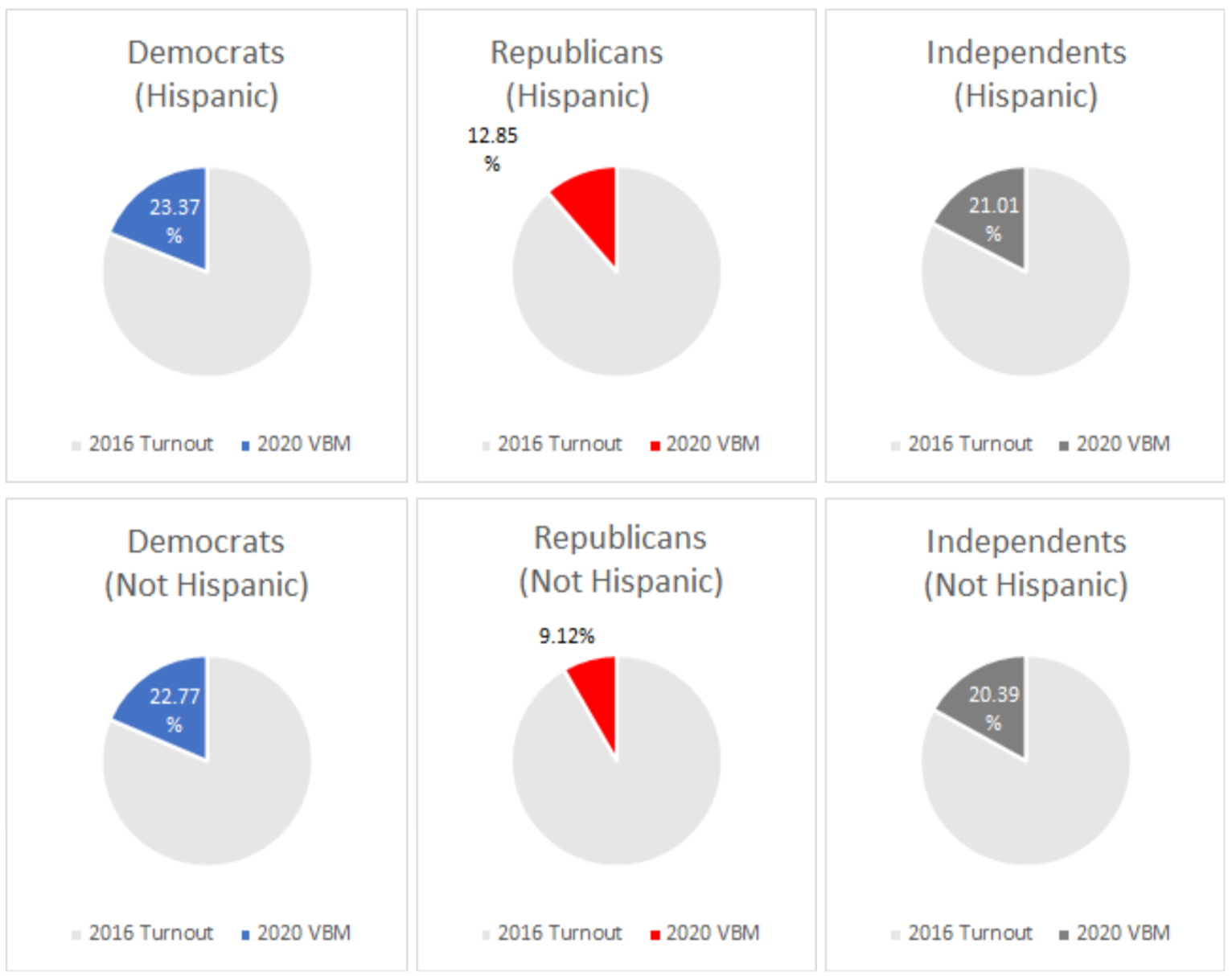 Overall, there does not appear to be an ideological split among the Hispanics; they simply seem to do better across the board. The edge does appear to be stronger among Republican and Independent Hispanics.