In the last couple of weeks, the VBM requests have slowed down to the point where you can see a slight curve bending down. 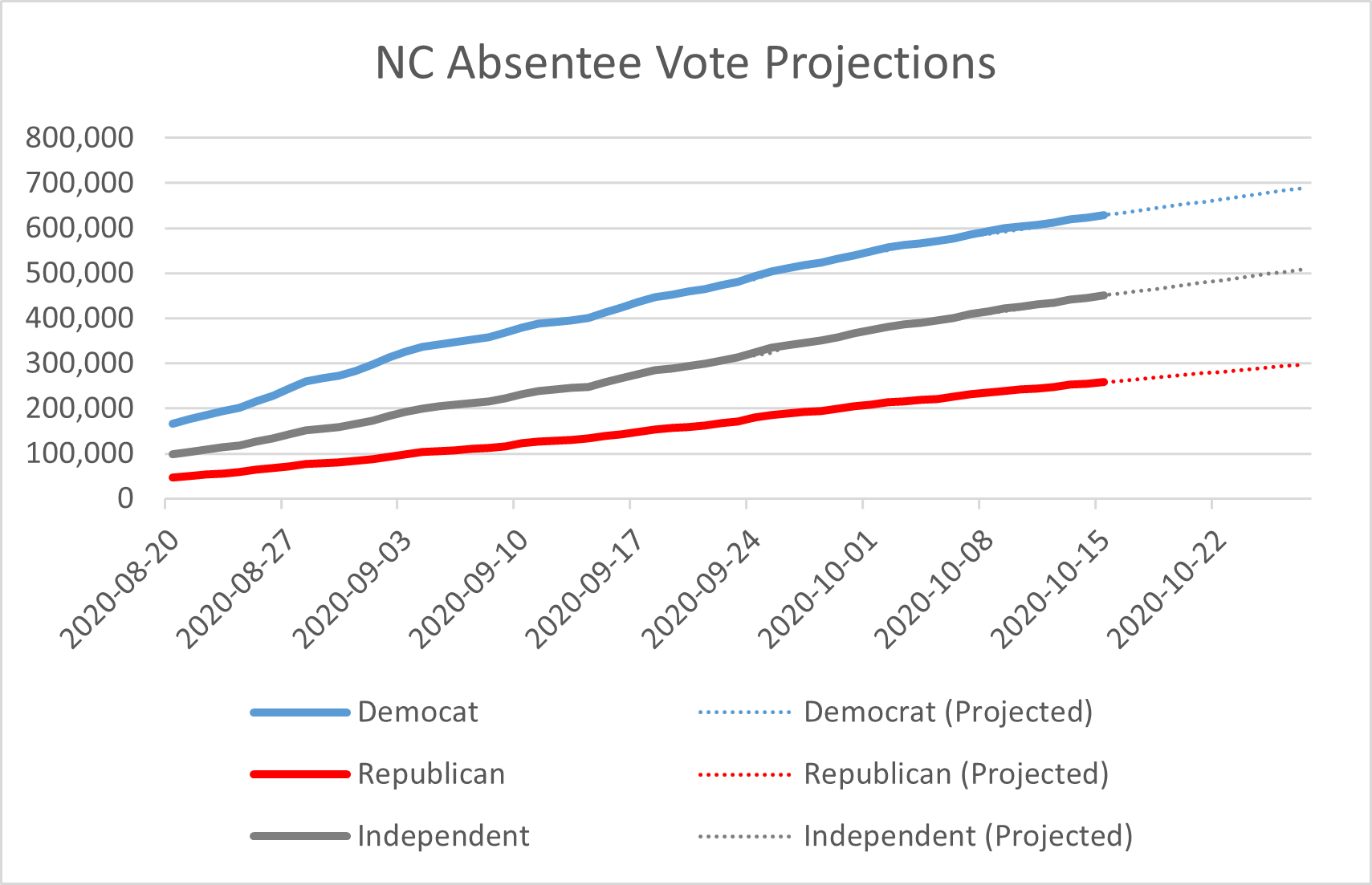 In the above image, the actual numbers are the solid lines, the projections are dashed lines. Since the last update, the trend has slowed down somewhat especially for Democrats.

This equates to 36.79% of 2016 turnout for Democrats, which is well below the 50%+ claiming to vote by mail per pollsters. Where are the “missing” Democrats? That remains to be seen.

Today, in-person early voting starts for North Carolina. It will take a week or so to establish trends, but in-person voting will provide the first acid test for Joe is Done.

To match what polls claim, roughly 20% of each party in terms of 2016 turnout should be turning out for in-person early voting.

Moving on to voter history registration - these charts take me a long time to compile, so I will post without much commentary. 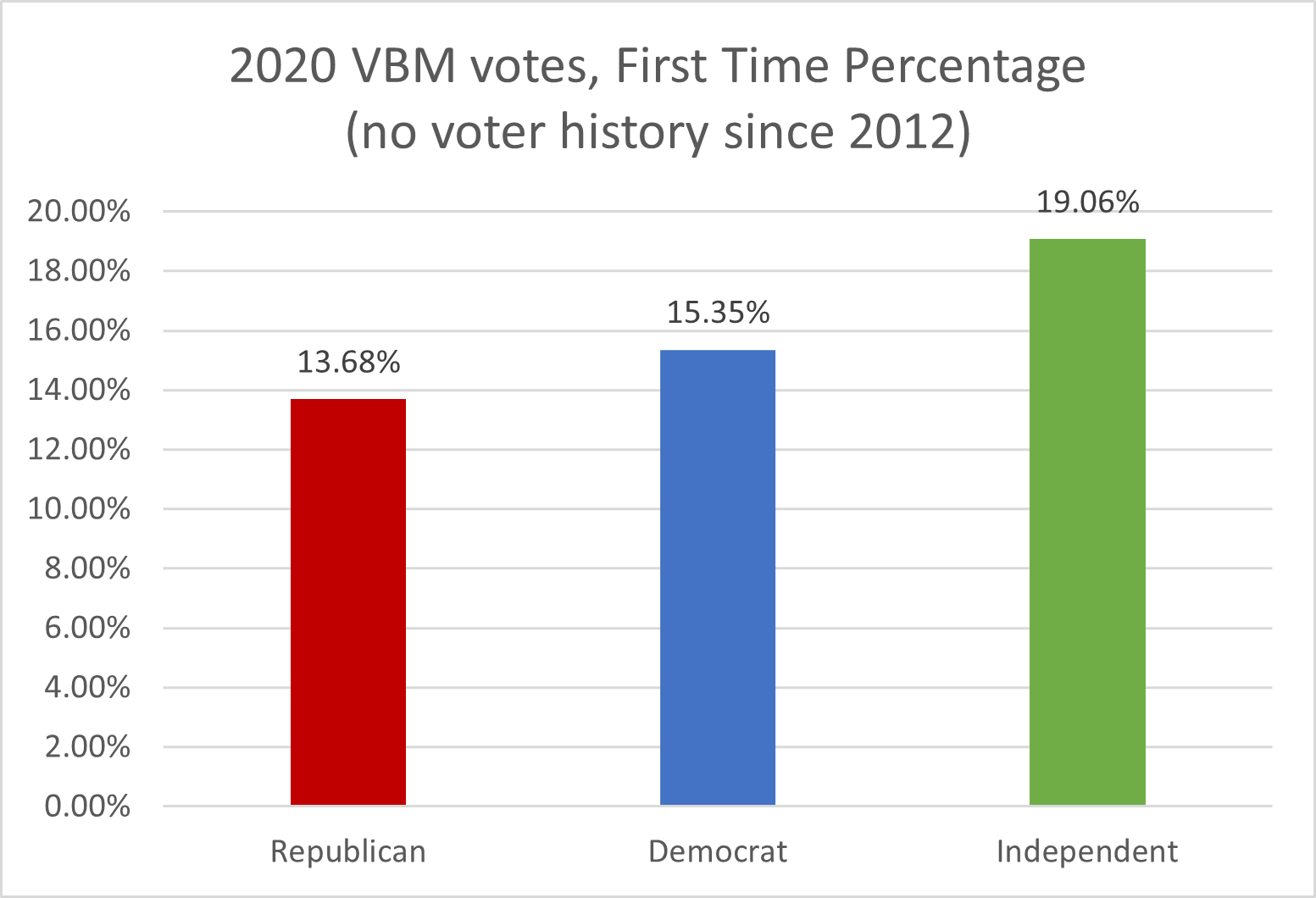 We start with what I see as bad news for Trump. Republicans have a slightly smaller percentage of first-time voters compared to Democrats and Independents. However, the advantage is small, and this may be an artifact of Simpson’s Paradox since Republicans are particularly older for VBM. 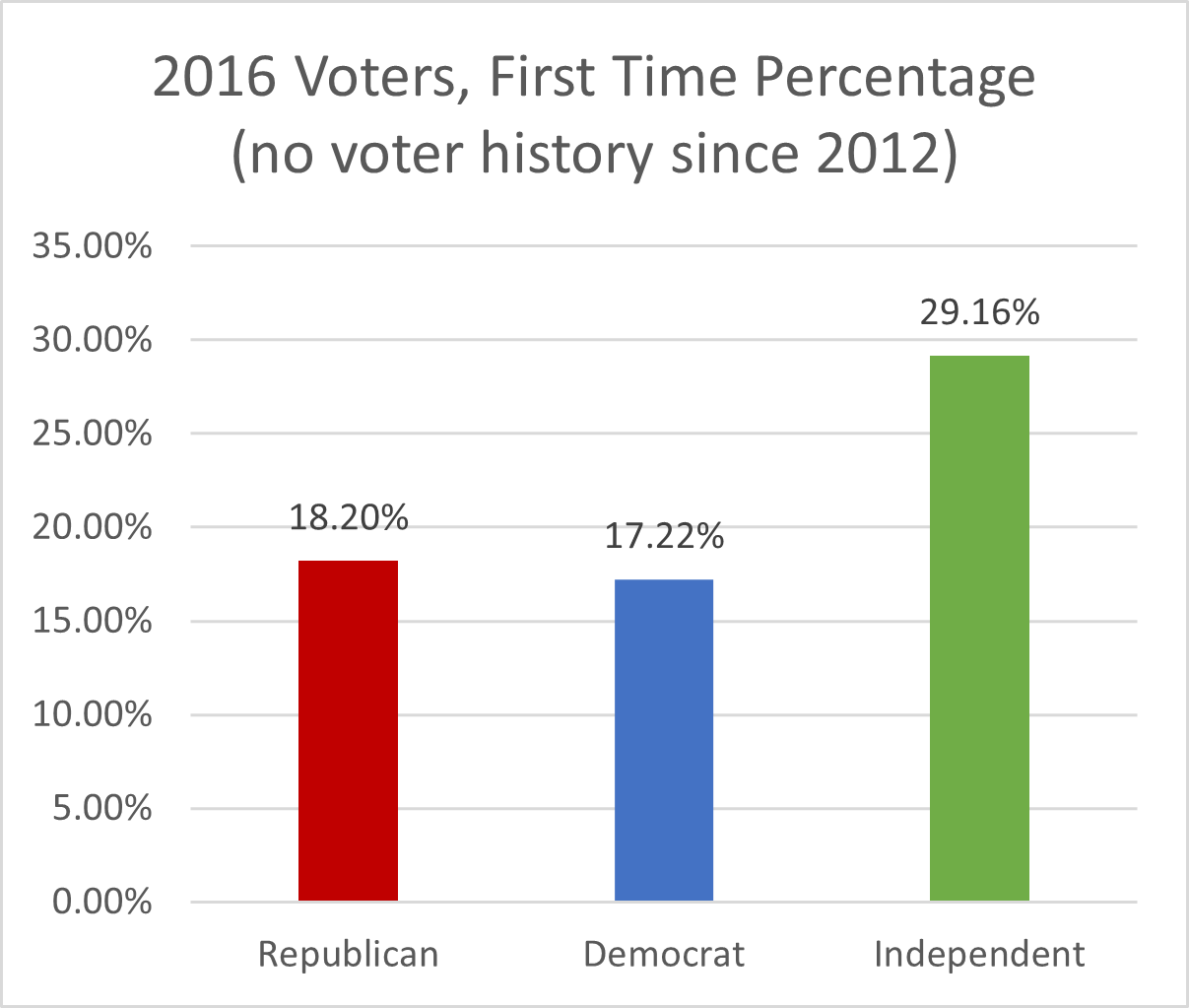 By comparison, in 2016, Republicans had a higher percentage of first-time voters. But this may change as in-person voting happens.

Of note is that first-time voters make a somewhat smaller percentage overall in 2020 compared to 2016.

Next I show the crosstabs by party, age, and gender: 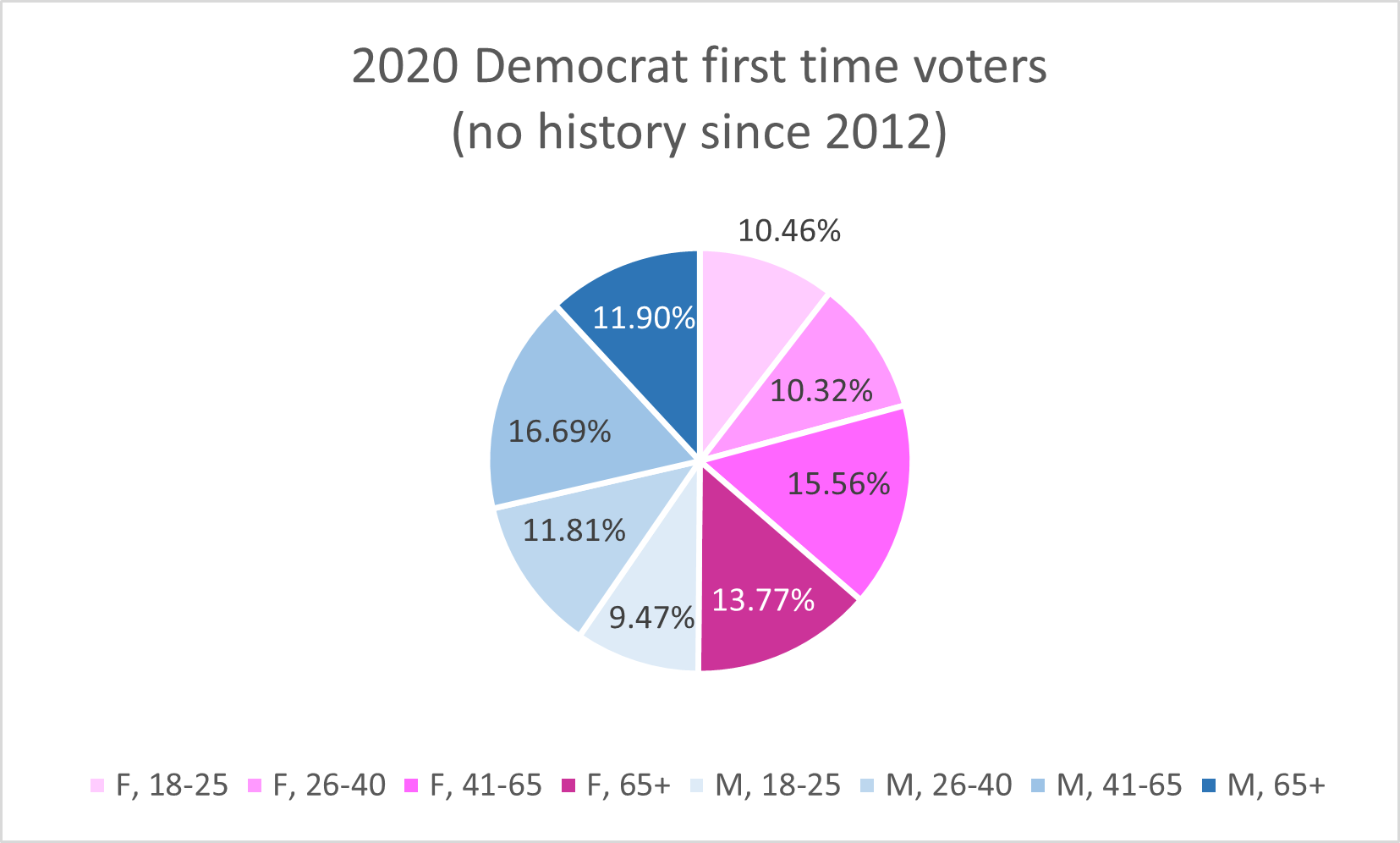 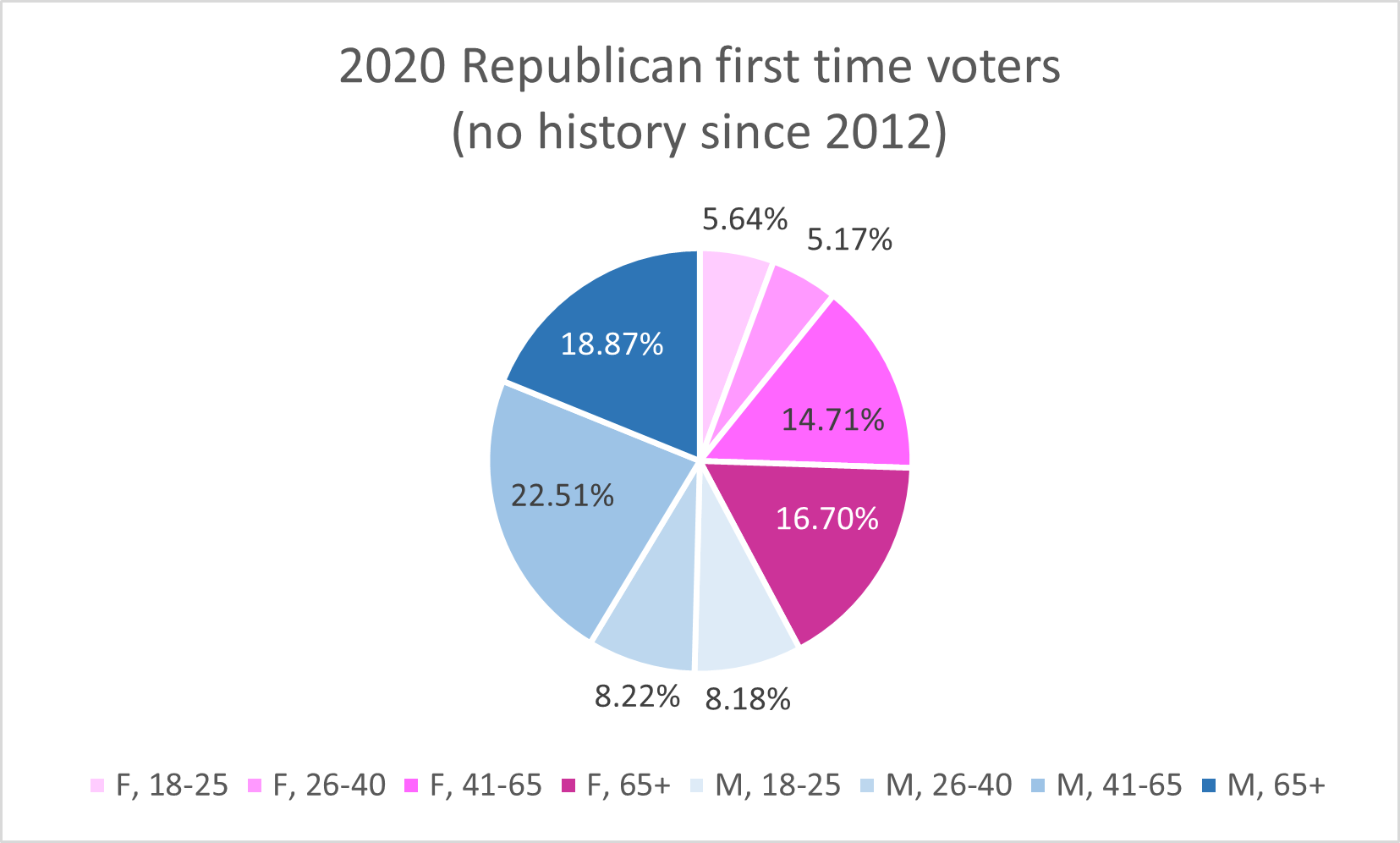 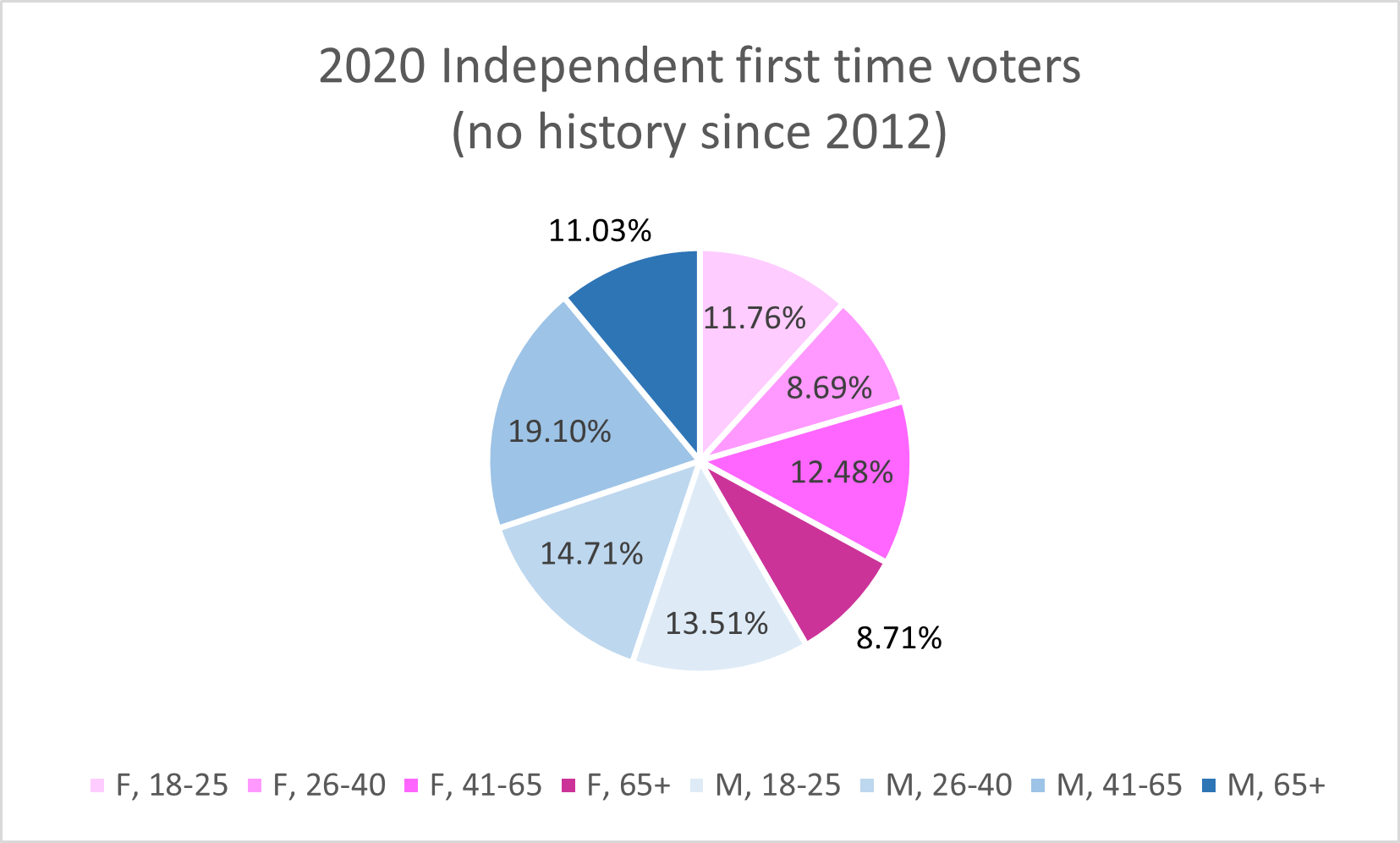 If you compare to the post from last time, you note a pattern: first time voters are more likely to be male compared to the rest of voters. This confirms Richard Baris’ polling that males are unusually motivated this year.

Supervoters are defined as people who voted in three general elections previous to this one. 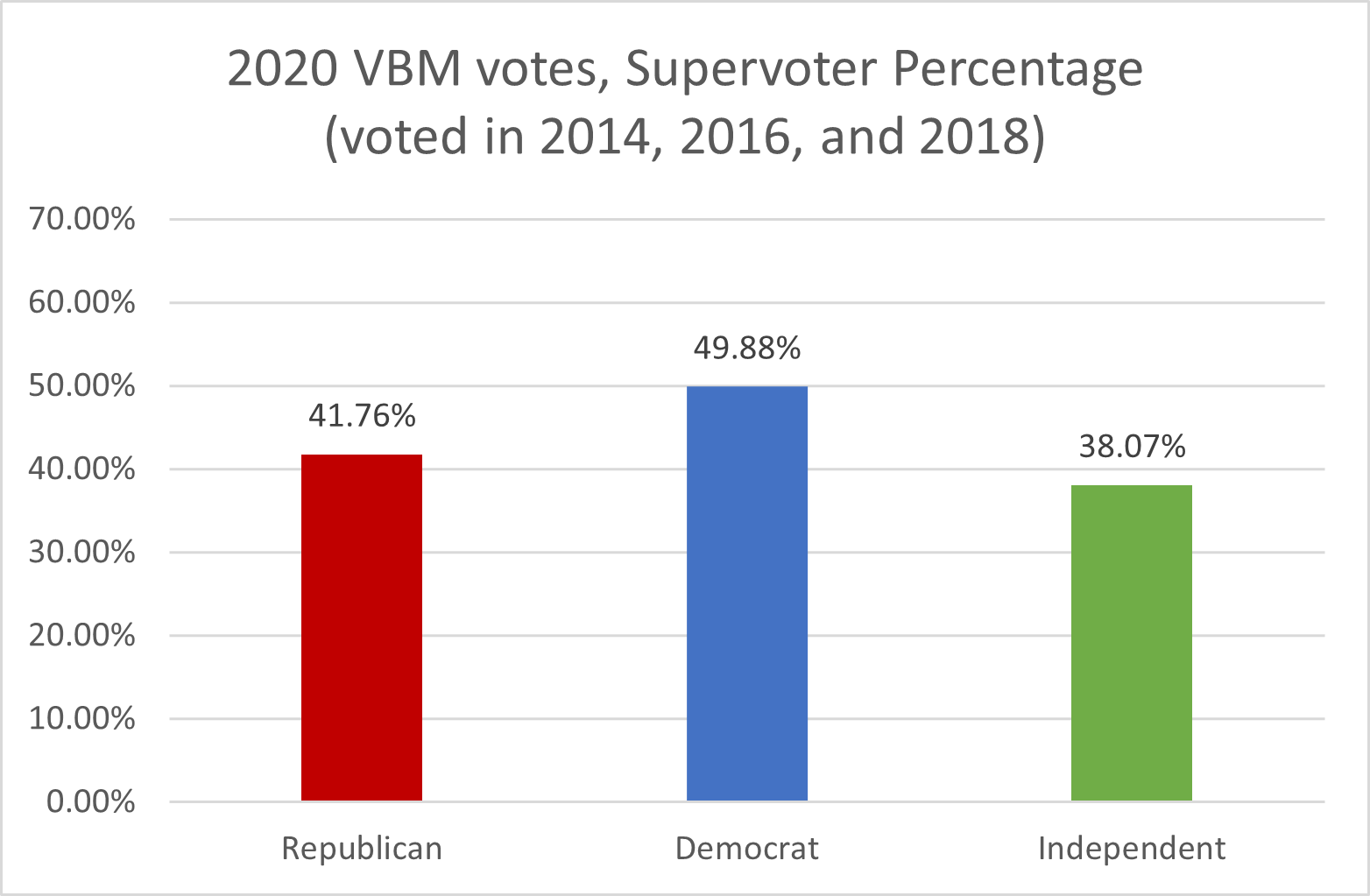 Here, we find that Democrats are about half supervoters, with a much lower Republican ratio. The lower Independent supervoter percentage is most likely due to new North Carolina residents tending to register as independents. 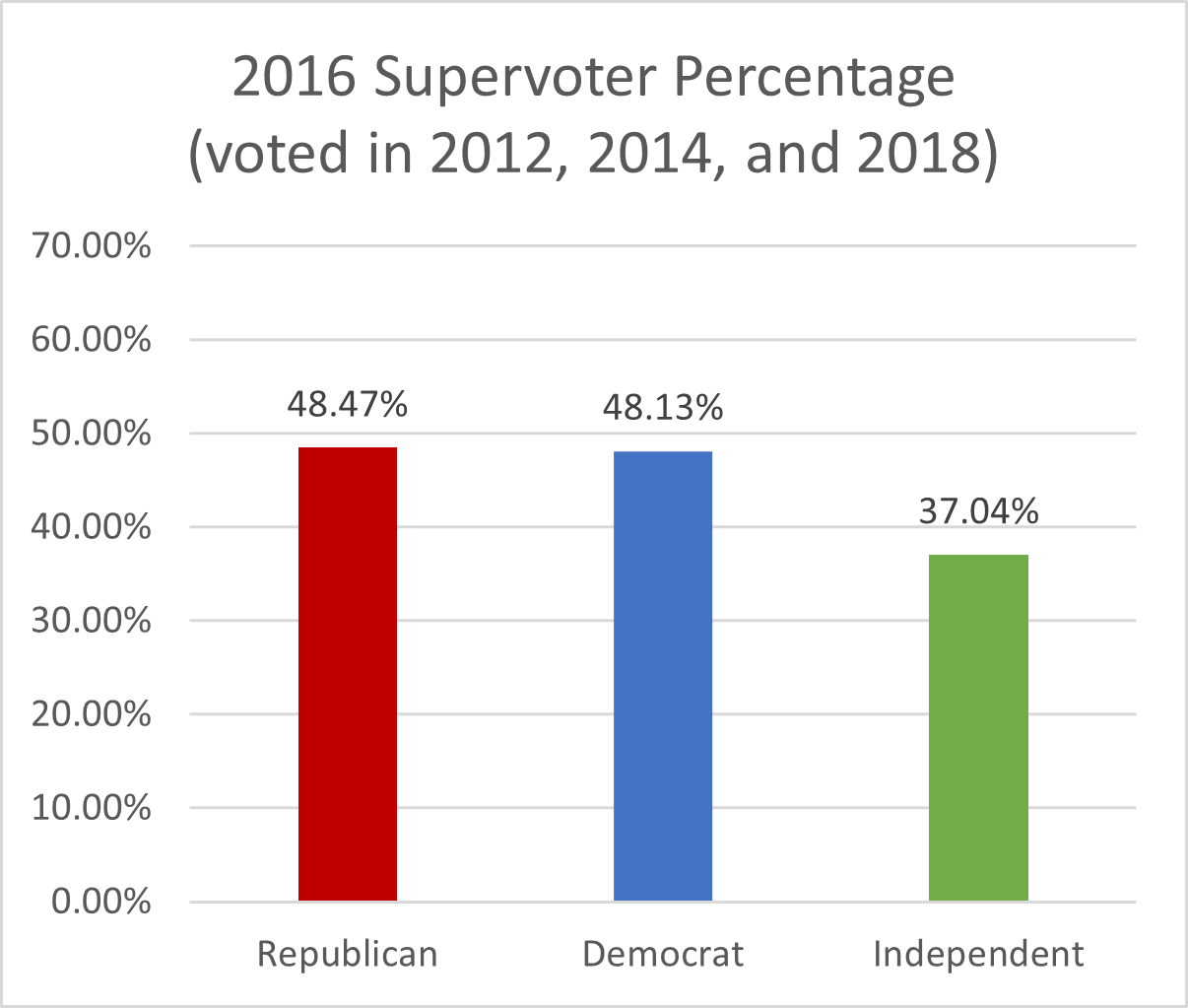 By comparison, in 2016, Republicans and Democrats had about equal supervoter turnout. 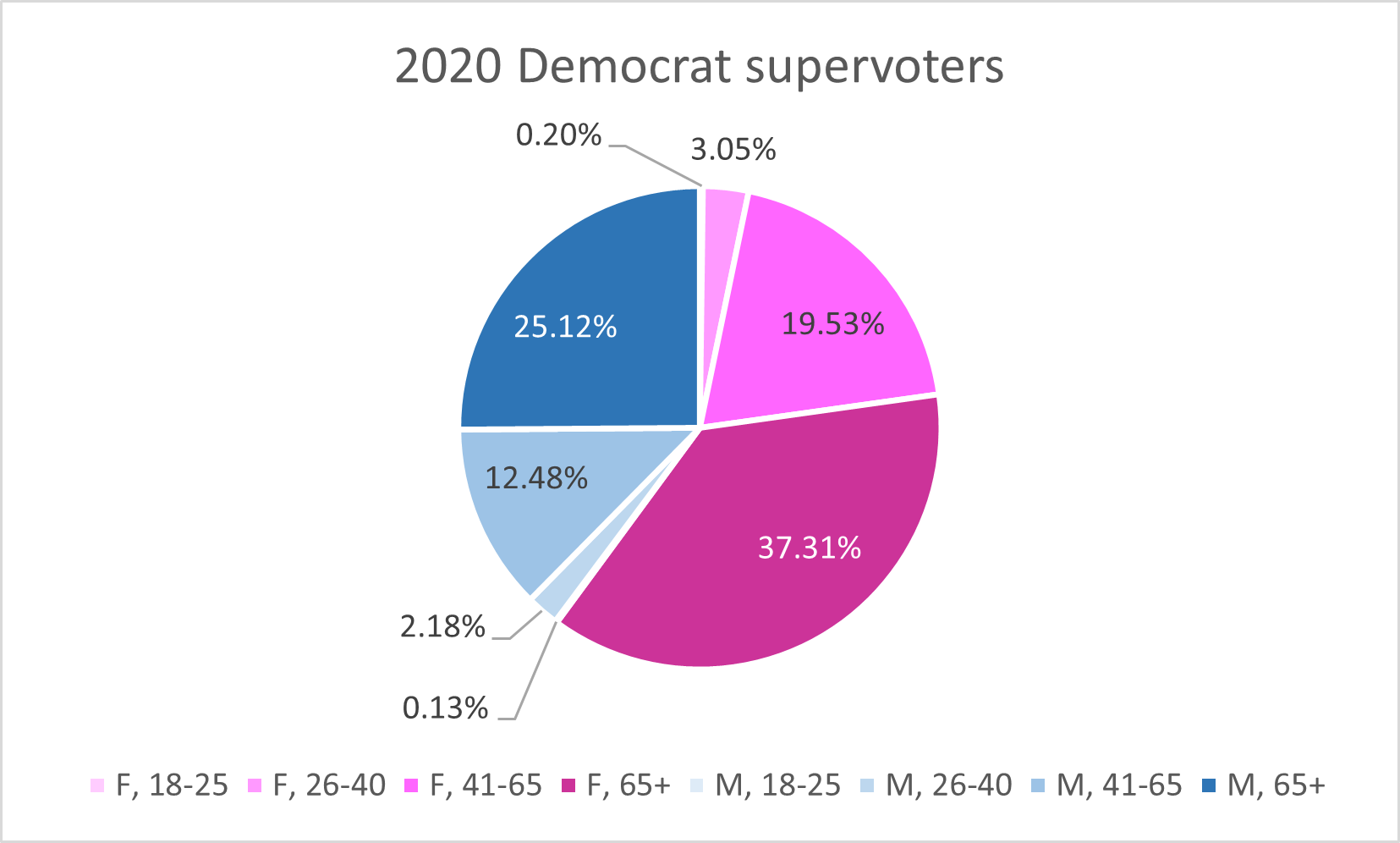 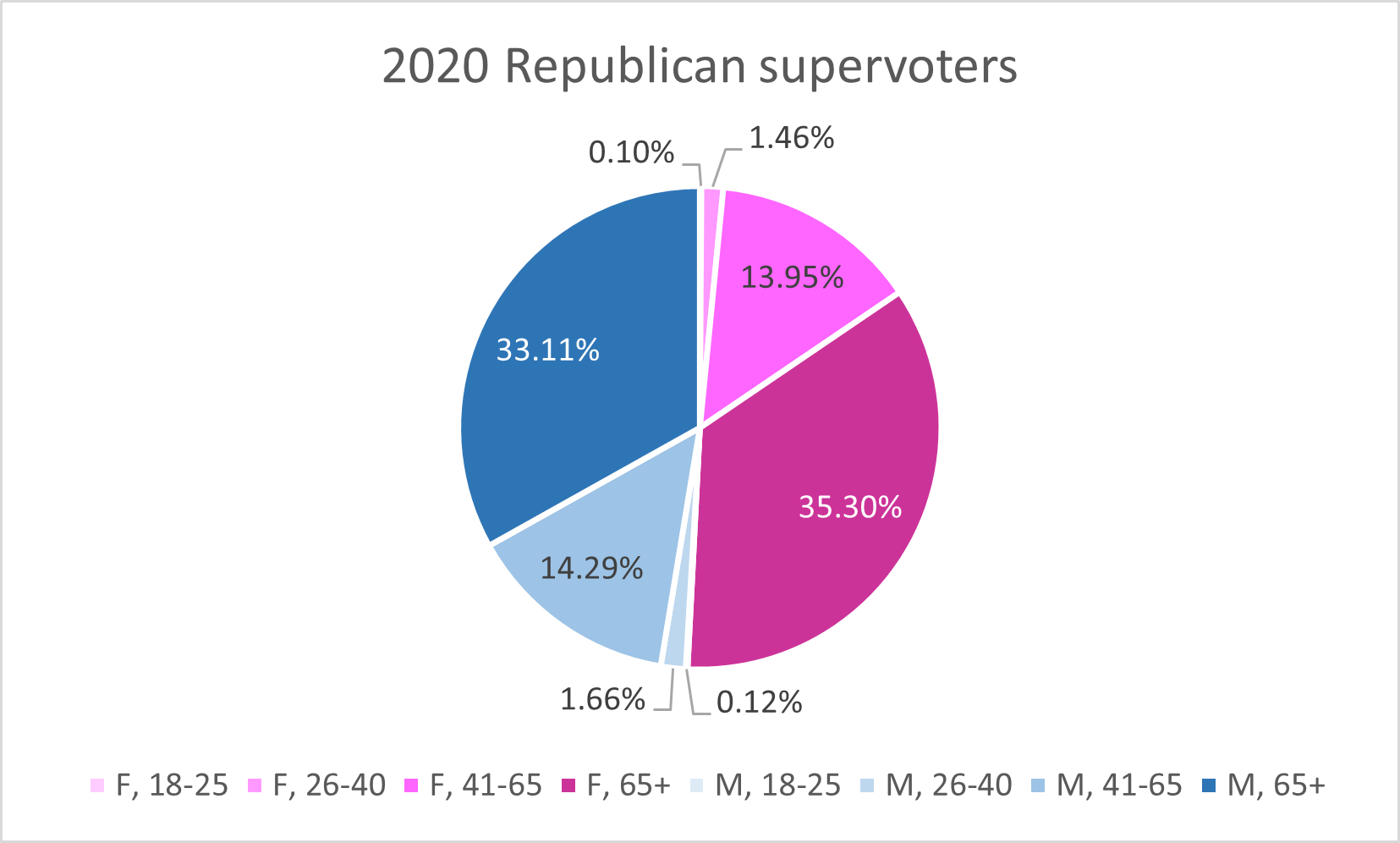 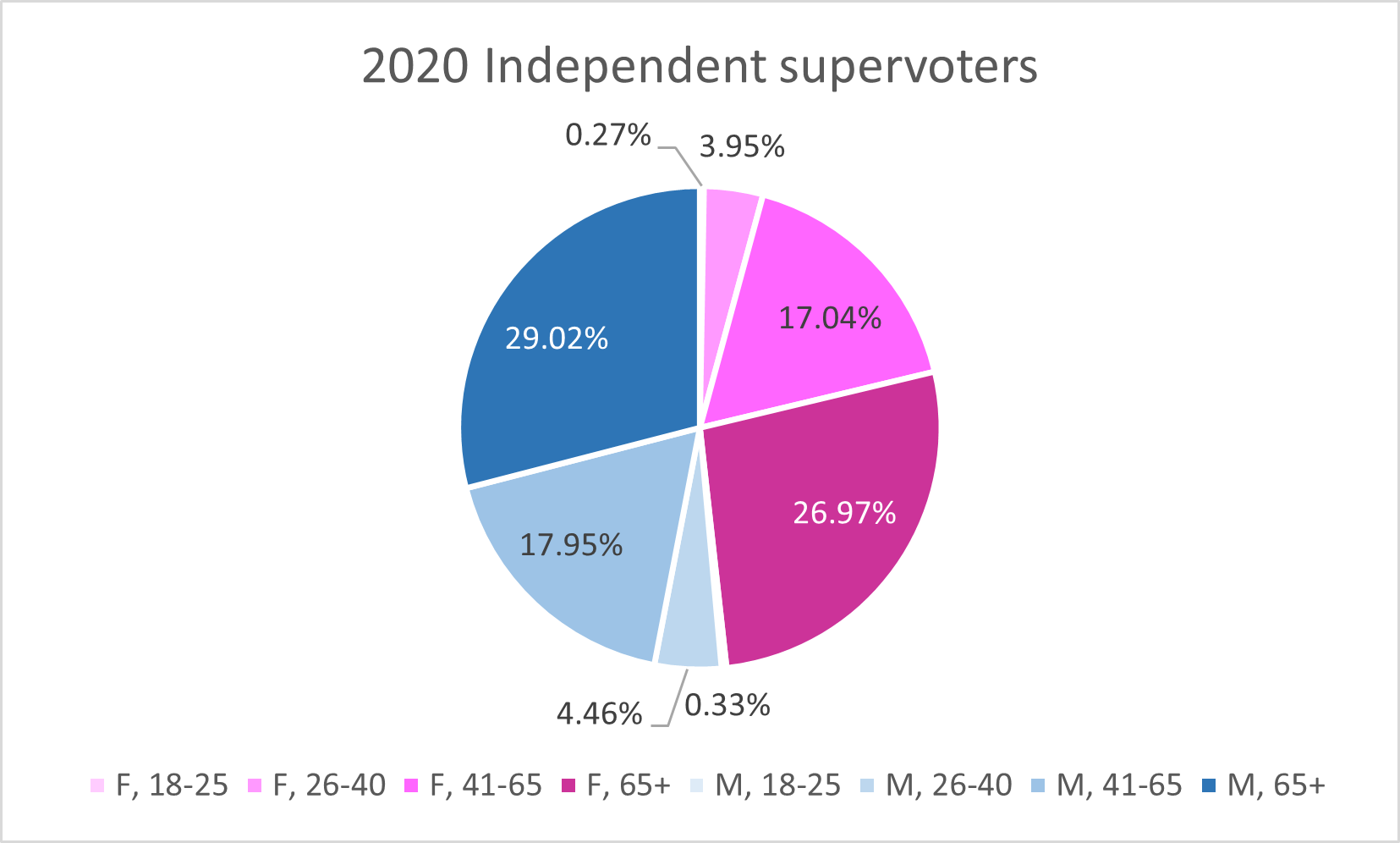 Supervoters tend to be older and more female. 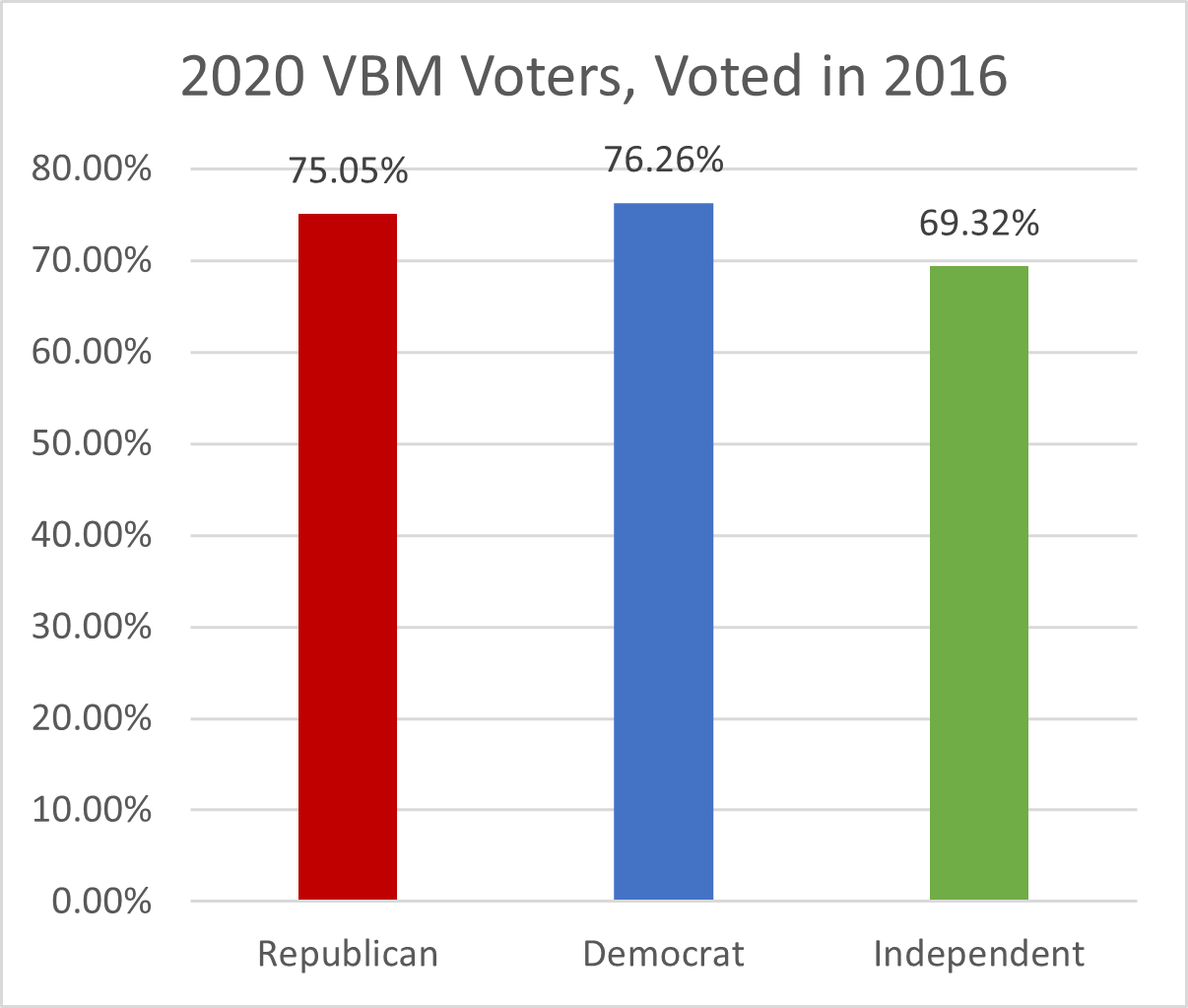 Out of the VBM pool, a slightly lower percent of Republicans voted in 2016 versus Democrats. Between that and the supervoters, this means that the VBM makeup for Republicans, for whatever reason, are made of less “consistent” Republicans. Typically this is a sign of enthusiasm. 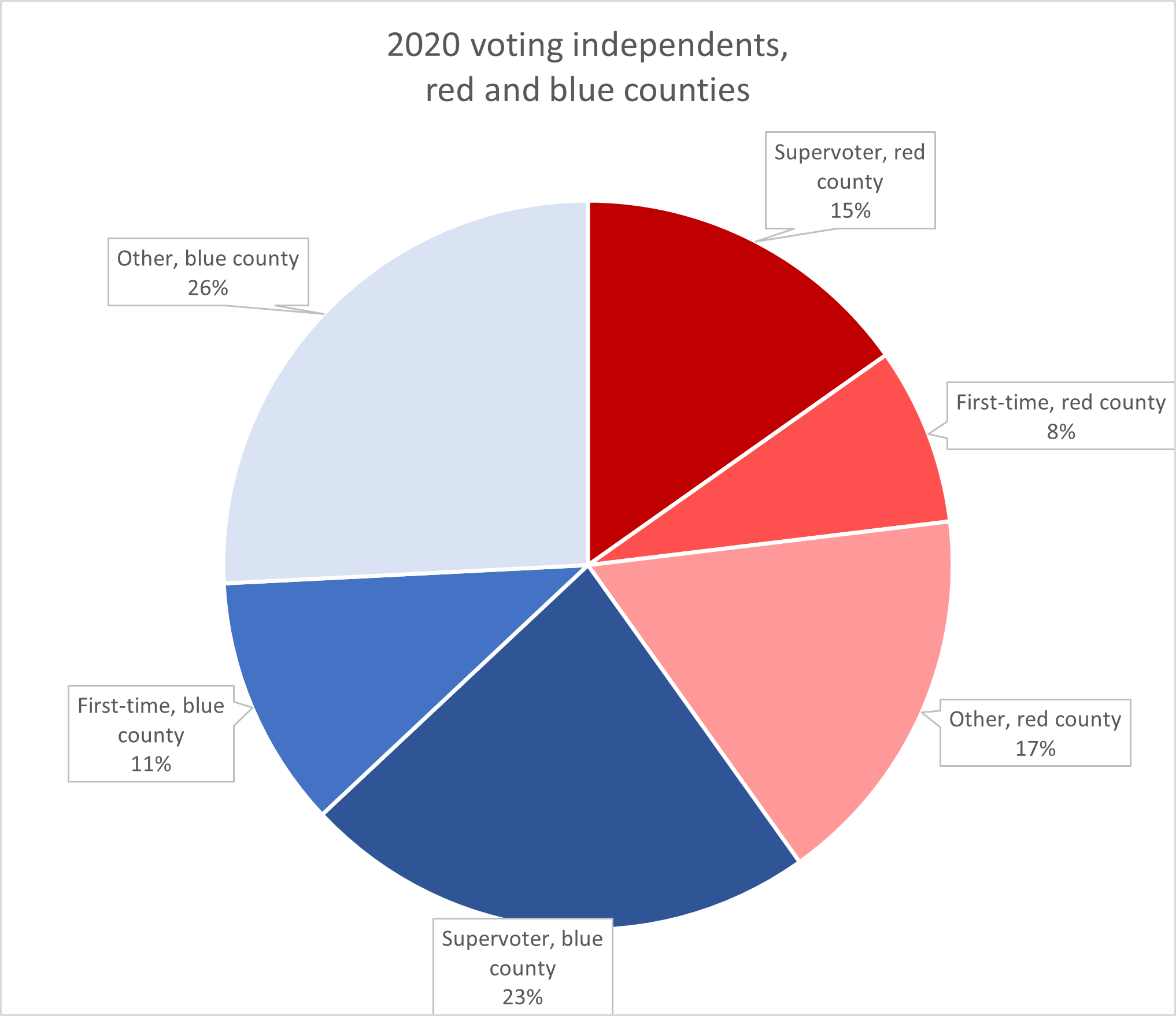 I take the independents and break them out by whether they are in red or blue counties.